How it was in Duluth when Elvis was here... 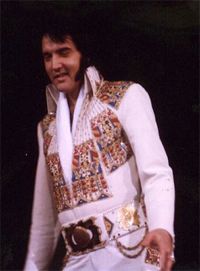 Written by Jim Heffernan for the Duluth News Tribune /August 20, 2021

Elvis Week ended in Memphis three days ago, and I missed it again. The annual event at Elvis’ mansion Graceland marks the anniversary of the singer’s death.

As arts and entertainment writer for this newspaper at the time, it was my responsibility to “cover” the Elvis visits. I have written about this before, but I thought I’d summarize some of my memories, and add some not mentioned before, one last time — almost on the anniversary of his death.

Glancing over what I just wrote, I realize I hadn’t bothered to include his last name: Presley. He’s so well known it’s not really necessary.

I well remember the day he died. I had a small office in the corner of the newsroom and one of the copy editors, responsible for monitoring the wire services, stuck his head in my doorway and said, “Elvis is dead.”

Bombshell. Bombshell to my generation (which is essentially Elvis’ generation) and a bombshell to me, because I had so recently covered the iconic rock star on his visits here. I got pretty close to him at his performances and once standing in his presence as he sneaked into the Radisson Hotel in the dark of night through a service entrance.

There were about a dozen people outside the hotel entrance when he alighted from a black Cadillac with his girlfriend and walked over to the non-public doorway. He stopped briefly and just locked at us with a slight smile before he turned and walked into the hotel to board a service elevator to his room. He’d reserved three floors, reports claimed. His plane, the Lisa Marie, was at the airport.

I guess I was standing about six feet from him at that moment. Many years later I stood six feet above him at his Graceland grave.

I was not a rabid fan of Elvis like a lot of people of my generation. We were in high school when he suddenly emerged on the popular music scene from “Heartbreak Hotel” and forever changed it. I thought he was pretty cool and liked his songs, but I never bought a recording or went to his movies.

Still, it was exciting to cover his Duluth visits for the paper. Back in those days, the newspaper reviewer of just about every concert or show was given what were called “ducats” — free tickets. Not Elvis. It seemed like the Elvis people didn’t want press coverage. Wouldn’t even talk to us.

As was the practice in those days (but no longer), no way were we going to buy tickets — we’re the free press which means we get in free; it’s in the Constitution isn’t it? — so I contacted Joe Sturckler, then manager of the Duluth Entertainment Convention Center (DECC) and made a deal. He would meet me and a photographer at a pre-arranged remote entrance and sneak us in. But, he said, if Elvis’ people caught us and threw us out, he could do nothing.

Elvis’ people didn’t catch us, but we didn’t have seats, all reserved. The result was we stood — right down in front at the side of the stage located on the east end of the Arena. We mingled with the mob of audience members who would run up and down the aisles to get pictures or a closer look at their idol. One teenage girl near us at the first concert fell and appeared to break her leg.

It was pretty much the same for both concerts. Sneak in. Work our way down to the stage and watch the spectacle. Elvis’ show was largely the same both times too. He had several warm-up acts, and then mounted the stage to great fanfare music (“Also Sprach Zarathustra” by Richard Strauss, the main theme of the film “2001: A Space Odyssey”) wearing an ornate white jumpsuit with a wide belt around his ample midsection. He spoke quite a bit and performed a passel of the songs identified with him. You know them. They are the soundtrack of mid-20th Century America.

I think both reviews — reports really — I wrote of the concerts survive in various corners of the Internet. I haven’t seen them lately, but I always remember that in the last one — about four months before he died — I wrote that he looked quite healthy. Hmmm. I didn’t go to med school.

By that stage of his life, he had gained quite a bit of weight, and it was noticeable. But he gave the audience what they came for, including passing out sweat-soaked scarves and bestowing a few kisses on quite a few of the rapturous women who made it to the edge of the stage just below him.

Both times, when his hour in the Duluth spotlight was up, he sang one last number, turned and dashed for a waiting vehicle on Harbor Drive and a short ride back to the Radisson.

A deep-voiced announcement echoed through the hall: “Elvis has left the building.” (He might have said “arena,” can’t remember.)

In many decades of reporting, the Elvis visits are among the most memorable. Maybe THE most memorable. In retrospect there is a sense that it was a brush with modern American cultural history.

The famous orchestra conductor and composer Leonard Bernstein (“West Side Story” and much more) once said “Elvis Presley is the greatest cultural force in the twentieth century.” Beatle John Lennon once remarked: “Before Elvis there was nothing.”

Well, there was Beethoven, but, yup, Elvis was something.

For more on Elvis in Duluth, check these links HERE, HERE & HERE.

Posted by Jim Heffernan at 3:42 PM