What would Albert Einstein’s nephew do? Reflections of Duluth’s fluoridation battle fought 50 years ago as the battle continues today in Oregon

Portland, Oregon, is going through a fluoridation fight. Yes, just when you thought the issue of adding trace amounts of fluoride to public water supplies to combat tooth decay in children was over everywhere, here it is again -- in the 21st century, no less.

Duluth went through a long and sometimes bitter fluoridation fight almost 50 years ago. I was in the middle of it, not as an advocate for one side or the other, but as a reporter covering the issue for the Duluth daily newspapers.

The pro-fluoridation side won in Duluth, but the antis put up a whale of a fight.

Objection usually centers on the belief by some people that government has no business “medicating” the population. That’s come up in the Portland fight, according to news reports, and it was an argument in Duluth in the early 1960s when our battle royal was fought.

But googling through recent news reports on the Portland battle, one thing is not mentioned that was bitterly argued in Duluth: That fluoridation of water supplies was a communist plot.

Why would the communists sneak fluoride into American water supplies? To undermine public health so that they could take over the United States, was the right-wing theory in the cold war years that many of the fluoridation fights took place. Hard-core conservatives don’t like the government involved in any aspect of health care.

I heard that argument frequently – at every fluoridation debate I covered, in fact – as the two sides in Duluth faced off at public meetings. On the pro side the leader was a prominent dentist. The antis had a well-known businessman and also the wife of the city’s fire chief.

It was she who introduced an entirely new aspect to the battle here that I hadn’t heard before, nor have I heard it since.

I was covering a fluoridation debate at the Duluth Heights Community Club one night when Mrs. Fire Chief pulled me aside as the meeting was breaking up. She was a fervent anti-fluoridation crusader, hardly able to contain her zeal.

Of course I can’t precisely quote her almost 50 years later, but I’ll approximate what she said, putting it in quotation marks for dramatic effect. Taking me by the arm, she said, “Did you know that Albert Einstein’s nephew in Seattle is against fluoridation?”

No, I didn’t, I had to allow. In fact, I didn’t know Albert Einstein even had a nephew in Seattle or anywhere else.

But this experience had a profound effect on me that continues to this day. Whenever I am confronted with an important decision, I ask myself, what would Albert Einstein’s nephew do? I can’t say it’s worked out that well.

Let me finish with a quote from Gen. Jack D. Ripper, the crazed American general in the 1964 movie “Dr. Strangelove” that might have propagated the communist plot myth. Here’s Gen. Ripper describing Russians:

“Vodka, that’s what they drink…on no account will a Commie ever drink water, and not without good reason… Have you ever heard of a thing called fluoridation of water? Do you realize that fluoridation is the most monstrously conceived and dangerous Communist plot we have ever had to face?”

Gosh, I’ve been drinking Duluth’s fluoridated water ever since and I’m still not a communist.
Posted by Jim Heffernan at 9:42 AM No comments: 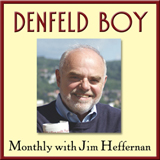 Some of you with roots in Duluth and area have been enjoying Tony Dierckins' newly launched web magazine called Zenith City Online.  Just in case you've missed it, you can catch it  HERE. There is something interesting posted daily for all of you folks who enjoy looking back at our area's history. As you know, I've been writing a monthly column for this new site as "Denfeld Boy," Yup, you guessed it, I've written about my memories growing up in the West End/Western Duluth. If you'd like to read those memory posts, check out this link HERE.

Posted by Jim Heffernan at 11:36 AM No comments:

With both major political parties’ national conventions out of the way, and Labor Day consigned to history, the 2012 presidential campaign pitting President Barack Obama and Mitt Romney is in the “home stretch,” ending on election day, Nov. 6.

So for a couple of months we will see almost nothing but politics on newscasts, in the papers and online. I enjoy it, although it’s a little nerve-wracking because -- at least at this writing -- the polls all say it’s close. I’m a strong supporter of one of them; you can guess which.

In my lengthy newspaper career, I only got close to a national campaign once, and it was a long, long time ago. I was still a fledgling reporter in 1964 when Barry Goldwater, the Republican, faced off against incumbent Democrat Lyndon B. Johnson.

The only national attention Duluth got in that presidential campaign came from the Republican side. Goldwater’s running mate, William E. Miller, a congressman from New York, made a fleeting trip to Duluth, spoke briefly to the media and hardly anyone else at UMD (on the lawn outside Kirby Student Center) and high-tailed it out of here, all on a sunny October day.

In those days, as with today, the designated candidate for vice president had a large retinue following him around the country, including representatives of major media organizations, although none of the big names. I was assigned to be part of the Duluth press corps covering this major political event.

So, I got to ride on the press bus with all of the national correspondents, who, it seemed to me, were a particularly unfriendly bunch. They could spot a hick reporter (like me) from the sticks (Duluth) from a block away and simply ignored us. Didn’t even look at us.

The national press people seemed perpetually bored with their assignment, and didn’t smile at all. I suppose they wanted to be assigned to cover one of the presidential candidates, and felt that it was beneath their talents and dignity to be chasing a vice presidential hopeful around. Maybe they were hung over. Maybe all of the foregoing.

That was the year, of course, when Minnesota’s own Sen. Hubert H. Humphrey was Lyndon Johnson’s running mate, but I don’t recall him coming to Duluth during the campaign. He might have. I did cover him several other times during his lengthy career.

But back to William E. Miller, a man of average build, pleasant features and ultra-conservative political credentials, just like Barry “Extremism in Defense of Liberty is No Vice” Goldwater. (I need hardly point out that they lost the election.)

It so happened that the very week of Miller’s Duluth visit, a huge scandal had erupted in Washington. A top aide to President Johnson, Walter Jenkins, was arrested at a YMCA in Washington, D.C., after being discovered engaged in a homosexual act. Believe me, in 1964 such charges were less common than they are today, and considered more grievous.

When Miller spoke in Duluth, he didn’t mention the Jenkins scandal. I don’t recall what he said. I took my notes and rushed back to the newspaper and wrote my story, turning it over to a city editor.

The city editor scanned it quickly and asked me if Miller had mentioned the Walter Jenkins scandal. I said he hadn’t, and, therefore, there was no mention of it in my story.

He responded by cranking a fresh sheet of copy paper into his own typewriter – always a dreaded sight to a reporter – and wrote a new top to my story. It went something like this:

“Republican vice presidential candidate William E. Miller avoided the Walter Jenkins sex scandal today in a whirlwind campaign visit to Duluth.” And after a couple more sentences, it picked up on my story with a “meanwhile” -- one of the handiest words in all journalism.

I learned a lot from that city editor, but that lesson stands out: Tell what didn’t happen. Sometimes that’s news too.
Posted by Jim Heffernan at 10:28 PM No comments:

Cravaack should get Kochs to reopen GP...

Cravaack should get Kochs to reopen GP


I was saddened to read the stark headline in the Aug. 22 News Tribune: “Duluth’s GP plant closing; 141 to lose jobs.” What a blow this summer after our devastating flooding.

I do wonder how many readers knew immediately what GP stood for in the headline. It stands for Georgia-Pacific, of course, the corporation that owns the 64-year-old hardboard plant on our waterfront that most folks around here think of as Superwood. According to reports, Georgia-Pacific purchased Superwood in the 1980s, and in 2005 Georgia-Pacific itself was purchased by Koch Industries Inc.

In this election year, the name Koch is becoming more and more prominent as billionaire industrialists David H. and Charles G. Koch, well known for their conservative politics and Tea Party support, spend millions to influence the congressional elections in favor of Republicans as well as to make President Obama a one-term president.

Since Koch interests own Georgia-Pacific and Georgia Pacific runs Duluth’s Superwood, wouldn’t it be nice if conservative Republican 8th District Rep. Chip Cravaack could persuade the Koch brothers to order GP to reverse its decision and save those 141 jobs in his district? Indeed, it wouldn’t surprise me a bit to learn that the Koch-backed Super PAC Americans for Prosperity already is contributing to the Cravaack campaign in its efforts to elect more right-wing Republicans to Congress.

If the Koch brothers would really like to help Cravaack get re-elected, they could order their Georgia-Pacific minions to keep our Superwood plant operating — instead of gutting it and putting it up for sale, leaving in its wake 141 Northland workers wondering what the future holds for them and their families.