Written By Jim Heffernan for the Duluth News Tribune on Saturday, February20

One of the problems we have here in Duluth is that it seems like we’re always behind the times — not in step with what’s going on in the rest of the country.

Right when such issues as “conspiracy theories” are a really a hot thing in other parts of the (not very) United States of America, we don’t even have any. We’ll take care of that later in this important column.

But first, you also hear a lot about this boisterous jingoistic camo clad group known as the “Proud Boys,” and what do we have here? A bunch of timid fellows who call themselves the “Shamed Boys.” They meet on alternating Wednesdays in the basement — of course, the basement — of the former YWCA (Young Women’s Chastity Alliance) headquarters, abandoned in the 1960s.

I was introduced to a Shamed Boy recently at a COVID-19 mask wearing fashion show sponsored by a local philanthropy under proper social distancing conditions. Besides a paisley mask, he was wearing faded jeans and a sweatshirt bearing the inscription: “Go Ahead and Tread on Me.” I was wearing my buffalo plaid mask.

“How’s it happen that you call your group Shamed Boys?” I asked the neatly turned out fellow whose mask bore the inscription “Leave Me Alone if Possible.” My mask is inscribed “Bigfoot Lives.”

“Well, we’re ashamed of the way things are going in this country, all the riots and stuff like that,” he said. “We’re ashamed that the politicians can’t get along and nothing gets done in this country. We’re perturbed as heck and hope we don’t have to take it anymore.”

I could see his point. I’d been feeling a little ashamed myself, and thought maybe I should join the group, although Wednesdays are choir practice in normal times when there’s no global pandemic threatening, among other things, choral singing. We’ll see when it’s over.

Meanwhile, we have to address our conspiracy theory — elsewhere labeled QAnon — shortage problem. While they’re gaining currency in Congress and elsewhere, we don’t have any here in Duluth at all. Other parts of the country are swimming in them and we’re frozen out up here in the north. I think it’s time we came up with a few to get in step with current trends.

And, of course, we have to keep in mind that our conspiracy theories will be accepted as gospel truth by some readers of this, a number of whom could use them as a basis for mounting political campaigns or rising up against the government, or else they aren’t really conspiracy theories, right? Good.

So let’s get started. We’ll call them DAnon (D for Duluth, get it?) conspiracy theories.

DAnon No. 1 — Everyone thinks our Enger Tower, atop the Duluth hill, is an innocuous tourist attraction and a good place from which to view the city from above. That’s what it appears to be, but it’s not really just a tourist trap.

People believe it is named for a dead Norwegian furniture dealer, but ENGER really stands for Electronic Notification Gyroscope for Emergency Reconnaissance. The tower is wired to communicate messages to a subversive naval alt-right nationalist group known as the Proud Buoys (naval branch of the landlubber Proud Boys) out on Lake Superior plotting to attack Duluth beneath the winter ice. (See DAnon No. 2.)

DAnon No. 2 — During World War II agents from Hitler’s Germany smuggled parts for a submarine (U Boat) through rural Canada for assembly in a remote cove of Lake Superior. The purpose of the submarine was to attack iron ore shipping on the big lake but the war came to an end before the submarine was ever used. The German agents were captured and sent to Remer, Minn., to cut timber, and several married local women. But that’s another story.

The assembled submarine remained in the remote cove until recent years when the seafaring Proud Buoys commandeered it and are conspiring to attack the massive installations of the Salvation Navy on the Duluth waterfront after sneaking through the Duluth ship canal beneath the Aerial Lift Bridge under water and ice in the dark of night. (See DAnon No. 3.)

DAnon No. 3 — The Duluth Aerial Lift Bridge figures strongly in our final DAnon. Duluthians and tourists love our bridge. It is an iconic symbol of everything Duluth, with all of its ups and downs, like the Eiffel Tower in Paris. It is the most photographed single object in Minnesota. But what people don’t notice is a pipe running up one end of the bridge, across the top, and down the other end. The pipe is a conduit for all of the raw sewage from Park Point, making it the most photographed sewage pipe in the western hemisphere. Put that in your sewage pipe and smell it.

Posted by Jim Heffernan at 10:13 AM No comments:

Why not put some humor in your obit... 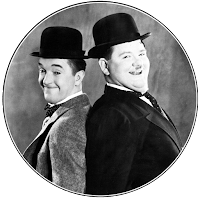 Written for the Duluth News Tribune by Jim Heffernan for Saturday, February 6, 2021

I noticed in a recent obituary in this paper that the elderly gentleman who had died was fond of the Three Stooges. What a delightful, and insightful, thing to include in a man’s obit. I didn’t know him but wish I had.

It got me to thinking about what comedy team I might want to mention in my obituary when that day comes. I like the Three Stooges a lot too, but I think I’d prefer to be survived, on paper, by Laurel and Hardy. They are my all-time favorites, and when they show up on TV even today I am always compelled to watch. Their movies were still making the rounds in theaters when I was a kid

Still, the Three Stooges were great too — Moe, Larry and Curly (the bald one). I liked Larry the best, I think. Don’t know why. Moe was so dominant but poor Larry, a study in self-deprecation, was always the victim. Curly was he who got slapped.

Maybe more of us ought to think about what comedy team we liked best to include in our final public mention. In thinking about this subject, and before choosing Laurel and Hardy, I considered several other comedy teams.

I suppose many in my generation might choose Abbott and Costello — Bud and Lou — but not me. They were very popular when I was a kid, but even at a young age I thought Costello was too silly, presaging the serious approach to life I would take when I grew up, as readers of this can readily discern.

When Costello sadly dropped dead in the early 1950s, it seemed like he and Abbott were almost immediately succeeded on the screen by Dean Martin and Jerry Lewis. They became perhaps the most famous comedy team of all time, but I didn’t particularly care for them. Of course I went to all of their movies — what else was there to do? — but Jerry Lewis didn’t speak to me (too silly too) and Dean Martin was just his straight man. (In the old sense of straight.)

Back in the Abbott and Costello days, a comedy team on radio was very popular but seems almost politically incorrect to mention these days. They were called Amos and Andy and I feel it perilous to go into detail about their racially associated schtick. Not going to show up in any obituaries, I’d wager.

In more recent years (but not that recent) Rowan and Martin made a big hit with television’s “Laugh In” program but are now largely forgotten by today’s funeral directors, to whom obituary material is dictated by surviving family members. They were funny though, as was their cast of characters including Goldie Hawn and Richard Nixon, who showed up there once and uttered the famous “sock it to me” line featured each week on “Laugh In.”

Let’s see here… I’m running out of comedy teams. Well, around the same time as Nixon and Agnew were a couple of comics called Allen and Rossi. The usual fat clown and thin buddy, but they did a lot of TV and could be amusing. I don’t think they’re of obituary quality though.

I’ll digress now to a confession of a low point in my long-ago newspaper reporting years when I was assigned to go to Hotel Duluth (now Greysolon Plaza) to interview one half of an old radio comedy team called Lum and Abner. (No relation to Lil’ Abner of newspaper comic pages fame.)

Lum and Abner? I’d never heard of them. Unbeknownst to me they were apparently on radio forever with a folksy show purportedly out of some bucolic small town in Arkansas. I didn’t know that, though, when I dashed over to Hotel Duluth to interview whichever one was here to speak to some group.

The place was crowded with cheerful attendees apparently eager to hear either Lum or Abner speak, but my problem was I didn’t know which. My quest to find out became a low point in my reporting career.

The speaker was pointed out to me (of course I didn’t recognize him; I’d never heard of him) as the crowd assembled for a cocktail hour, so I approached the star and introduced myself as a reporter there to cover his lecture. He didn’t seem very friendly but that often happened when speakers realized they were going to be covered by the newspaper, especially politicians. They’d have to watch their fabricating more closely.

It was awkward for me because I didn’t know if I was talking to Lum or Abner and couldn’t proceed without knowing, so I asked:

“Which one are you, Lum or Abner?”

That pretty much ended the interview as he turned on his heel and got on a nearby elevator, the doors mercifully closing as he glared out at me after admitting he was Lum.

Not going to put Lum and Abner in my obituary.

I’ll end all this by mentioning a husband-wife comedy team on radio known as Fibber MaGee and Molly, played by Jim and Marian Jordan. They were enormously popular on radio before TV hit big in the 1950s, as they engaged their neighbors and other characters like Digger O’Dell, the friendly undertaker.

As an aside, they had a local connection. Peggy Knudsen, an actress who was born and raised in Duluth and who had considerable success in Hollywood in the 1940s and ‘50s, was married to their son for a time. You can Google her.

All, of course, have now been visited by Digger O’Dell’s successor brethren, hardly remembered by anyone…except me.

Even after all this, I believe I’ll stick with Laurel and Hardy.