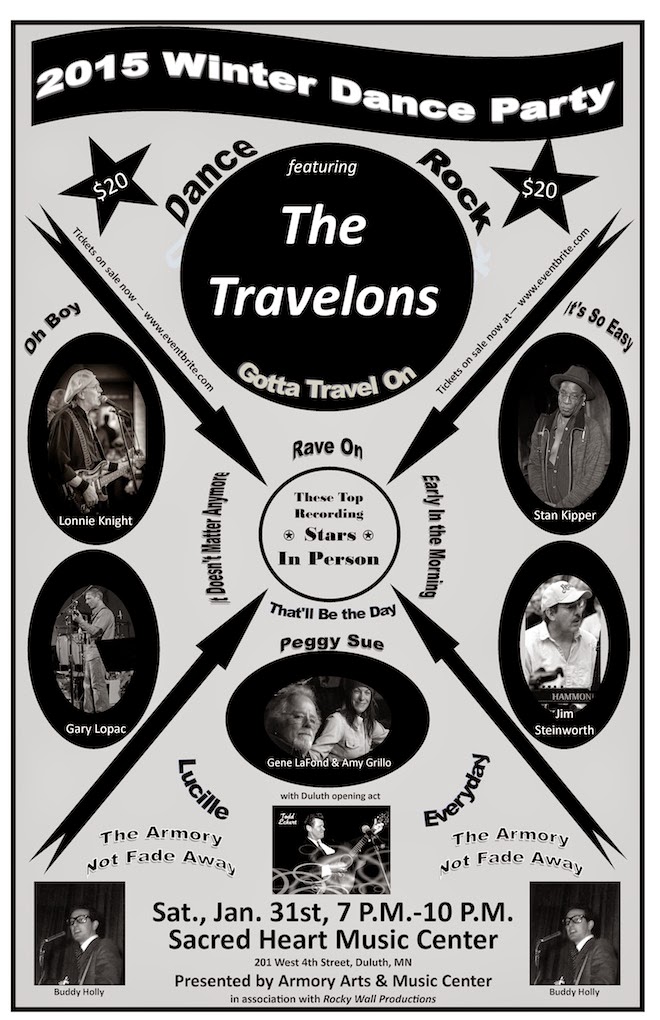 Everyone's invited...
To join the Armory Arts & Music Center on Saturday, January 31st for an evening of song and dance in celebration of the 56th Anniversary of the historic Duluth Armory Winter Dance Party.

Dance to the music of Buddy Holly and contemporaries while raising awareness about the important restoration and revitalization work underway at the HISTORIC DULUTH ARMORY.

My friend, the late Lew Latto, was the MC for the original event 56 years ago at the Armory when Buddy Holly et al were there... along with me, Bob Dylan and a lot of area teens. As you all know, Holly's plane crashed and he and others died 3 days after leaving Duluth.
The Day the music died...

Read more on my blog HERE and HERE    Jim
Posted by Jim Heffernan at 6:08 PM No comments:

By Jim Heffernan
What follows is a column I wrote for the Duluth News Tribune on one of the anniversaries of the end of World War II in Europe. I’d forgotten about the column until this month when a copy of it was found among the effects of an elderly Duluthian by her daughter, and passed on to me. This year (August) will mark the 70th anniversary of the end of the war. I reprint the column here because its descriptions of my memories of World War II are the same today as they were when I wrote it. Here’s the column.

It’s (the anniversary of) V-E Day. I don’t remember May 8, 1945, specifically but I remember the war. I was born the autumn Hitler invaded Poland and was a kindergartner when the Germans surrendered. But I remember a lot about the war.

I remember no sugar, no jam and jelly. I remember red and blue (rationing) “points” which my folks had to use along with money to buy certain groceries. I remember being taken to movies and seeing newsreels of the fighting and bombing and being scared by it.

I remember asking my mother if I would ever have to go to war. “No,” I remember her comforting answer. I remember the shortage of gasoline and tires, prompting my father to sell the family car and go without. My father had served in the Army during the First World War and was too old for the second. Like many others who couldn’t serve, I remember he did what he could on the home front. He was involved in Civil Defense and had a big white helmet that I liked to try on, although it was very heavy on my head.

I remember blackouts in Duluth – rehearsals for the local population in case the Germans or the Japanese ever decided to bomb the city’s ore docks. (I didn’t understand then but later realized they played a key role in the American war effort.) I remember a lot of men worked in places called “the shipyards.”

I remember gold stars on little flags hanging in the windows of people’s homes and knowing they represented “boys” who were in the service. I remember thinking they were “men” and being confused. I remember when service men from our church got killed in the war and how bad everyone felt.

I remember how badly I wanted a scooter and how hard they and other toys were to get because all of the metal was going into the war effort. Then I remember getting a scooter made all of wood – frame, wheels and all – and how the wheels wouldn’t stop squeaking.

I remember wanting a sailor suit and how mad I was when I got one but it had short pants. I remember having friends whose fathers were in the war and hearing stories about how they were stabbing Japanese with bayonets in jungles. I remember that much of our playtime involved playing war and shooting and getting shot. “Bang, you’re dead, you dirty, rotten Nazi.”

I remember “Kilroy Was Here.” I never understood it and still don’t.

I remember the swastika and Hitler and that they were evil. Once I saw a swastika embossed on an old book in our attic (published long before it was adopted by the German Third Reich), and I remember defacing the book with color crayons. I remember Mussolini and Tojo.

And I remember that the war was suddenly over and we could get jam for our bread.

Years later I realized that the war had been fought for me. I was one of the babies of the next generation who Winston Churchill cocked his ear and listened to and said he could hear crying.

Even today when I see World War II vets marching in parades in their Legion or VFW uniforms I stop and think, “Hey, those guys fought a war for me.” And I appreciate it.
Posted by Jim Heffernan at 9:03 PM No comments:

Looking back to 2014...
As some of you know, I celebrated a monumental birthday in October of 2014. I and my Denfeld classmates all turned a magical age and we got together in September to have a 75th birthday party reunion. Fun! When my actual birthday rolled around in October, my family helped me celebrate also. They brought out my pristine 1949 J.C. Higgins bike from my youth and I posed on it for posterity. Up until we moved from our last home, I actually rode it around the neighborhood a bit. It was an original fat-tired bike. Now, of course, the tires of fat-tired bikes are even bigger. Since our move, the bike is in storage and only brought out of the cobwebs for special times... like this. So here I am pictured here on my old J.C. Higgins.
Posted by Jim Heffernan at 12:19 PM No comments: