Little pomp, under the circumstances... 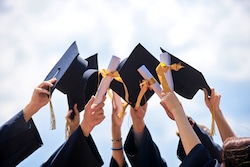 The following column was published today, May 31, 2020, in the Duluth News Tribune

I was touched by the photo page of Denfeld High School graduation “ceremonies” in last Sunday’s Duluth News Tribune.

Of course, as everyone knows, there were no actual ceremonies in the traditional sense this year, replaced by each cap and gown-clad individual marching across Denfeld’s massive stage alone in an empty auditorium and being handed a diploma by a masked adult, hold the handshake.

Thank you very much COVID 19.

What got my attention most were two photos: The first one of a lone graduate marching down the aisle of Denfeld’s impressive auditorium en route to the stage, the hundreds of seats on either side empty, save for a few close family members in the front row wearing masks.

Then another photo showed a young woman graduate wistfully standing at the lectern before a virtually empty auditorium reflecting on the speech she had prepared; a speech intended for a full house, her proud family, and everybody else’s. Wow. Who’d have thought it would ever come to this?

Life in a global pandemic.

As I perused the photos, my thoughts raced back to my own high school graduation on that same stage, in that same beautiful auditorium oh so many years ago now. In those days the entire graduating class was seated on the stage, facing the audience of well-wishers.

Denfeld’s stage is one of the biggest anywhere, designed that way, I was once told, to be able to hold an entire class of graduates. There were around 330 in my class in 1957 who marched in to the familiar Pomp and Circumstance theme emanating from the huge Denfeld pipe organ. It was at a time when America had entered a period of prosperity and optimism following World War II. Our prospects were limitless, it seemed.

My prospects were uncertain. I hadn’t given the next phase of my life much thought. I was, and still am, a take it one day at a time kind of person and hadn’t planned for the “real world” lurking outside of that wonderful venue for a graduation ceremony.

I recall getting a large dose of real world on my graduation day as I exited the auditorium, still in my cap and gown, and saw a classmate on the outdoor steps of Denfeld, still in his cap and gown, holding a baby. He was the father.

Now I know it might be fairly commonplace in more recent times for some high school students to have already started families, but in my era it couldn’t happen. The school had a policy that if a girl became pregnant, out she went. Couldn’t attend classes. And if the father of this impending child was also a student, out he went too, and good luck for the rest of your lives, kids. No commencement for them.

But my classmate fooled them. His girlfriend didn’t go to Denfeld. And this Denfeld father-to-be kept his mouth shut about it, even through the birth of the child, which had apparently taken place during his senior year. Not a word.

Thus, he was able to graduate with us, cap-gown and mortarboard, Pomp and Circumstance, boring speech, diploma, handshake and all… and does the baby need changing? That child is now retirement age.

Finally, and I related this in a column years ago but I’ll have at it again, I must tell how I celebrated my big graduation night after the ceremony.

My parents had gathered a few relatives and adult close friends in our family home to honor me on this lovely June evening. Of course I showed up at home, but only briefly, my friends waiting outside in a car for me to join them for some real celebrating. So I went in and collected the graduation cards, most containing a bill with a picture of Abraham Lincoln, thanked them all and then high-tailed it out of there, leaving them to celebrate me without me.

Where did we go? I shudder to reveal it. We went to the Gary dump. Yes, the then landfill in Gary-New Duluth where a bunch of gun-crazy fellow graduates had assembled–gird your loins here–to shoot rats. Yes, shoot rats. I wasn’t an active participant in the rodent slaughter, just nearby in my navy blue graduation suit, at the Gary dump on the night I graduated from high school, when members of my family were gathered elsewhere to honor me. It is painful today to think of it. My only defense is I was 17 years old.

So, congratulations to the 2020 graduates of all the high schools, so many schools going to great lengths–just as Denfeld has–to make the occasion as memorable as possible for the grads. Appreciate the efforts of those elders, and be proud.

You are unique in the annals of American education. The future depends on you. My generation has taken care of the past, and not that all well, it seems.