Hi Everyone,
It's getting to be that time of year when I leave the "Cooler Near the Lake" land and head to the land that's "warmer by the ocean" for a short winter break.
I'll be writing my muses here on the blog again soon, only from somewhere that has no snow on the ground. So please visit the blog again soon.
As you know,  we're not snowbirds...just winter vacationers.  I thought you'd enjoy seeing some recent photos of our beautiful Duluth area. The beauty of our area is one of the big reasons for drawing us to stay here most of the year.  These photos above are by Travis Chadwick, the son of a friend and former Duluth News Tribune colleague. He joins the ranks of top notch area photographers (Dennis O'Hara, Tony Rogers, and Scott Tchida) who have been highlighted on this blog. You may have noticed one of Travis Chadwick's shots of the tall ships moored in the harbor pictured on the 2011 wall calendar for the Seaway Port Authority of Duluth. To see more of photos by Travis, check out his web site HERE. Enjoy, Jim
Posted by Jim Heffernan at 1:06 PM No comments:

The day President Kennedy took office was cold in Washington and in Duluth... 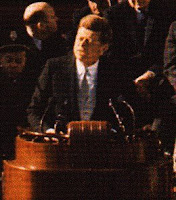 This week marks the 50th anniversary of the inauguration of John F. Kennedy as president of the United States.

I remember the day very well, although I’m not sure I recall seeing the famous inauguration speech – “ask not what your country…” etc. -- live on TV. It’s been shown so many times since that it’s difficult to know if I saw it live or am remembering film of it. I do recall the poet Robert Frost, very old, participated, reciting a poem he wrote for the occasion, so maybe I saw it live.

It was an exciting time for my generation. The previous November I had voted for the first time, having turned 21 a month before the election. The voting age was later changed to 18. Of course I voted for Kennedy. Youthful looking and seemingly vigorous, he had captured the imaginations of many young people I knew and many around the country, although he didn’t beat Richard M. Nixon by much. But he won, that was the main thing.

I was still in college in January 1960 – I should say back in college – at the University of Minnesota Duluth. I’d dropped out for a couple of quarters and went back that January to finish my education.

My most vivid recollection of that January day is that in the afternoon I visited my barber for a haircut. Here is why I remember such a trivial thing: His shop was next door to a television repair business that had placed a television set in the window facing out that was tuned to the inaugural parade in Washington.

After my haircut, I stopped to view the parade for a few minutes – not only because of the parade but because it was the first time I’d seen color television. I marveled at it, having spent my entire TV life (about 10 years at the time) viewing black and white, and would continue in B & W for quite some time. Color was a novelty in 1960.

The TV image showed newly minted President Kennedy on the reviewing stand acknowledging the passing units with many smiles and waves. It was unseasonably cold in Washington, and he was wearing a dark topcoat. It was also cold in Duluth – January, after all – so I didn’t tarry long on the sidewalk watching the parade pass by on color television.

After finishing college in 1962 I spent some time in the Army (“ask what you can do for your country…”), stationed near Washington, D.C., and saw the White House for the first time. Standing outside on Pennsylvania Avenue, I wondered if President Kennedy, my commander in chief, was inside at that moment. Who could know for sure?

Following active military service, back home I got a job as a reporter at the Duluth newspapers and in November 1963 was involved in local coverage of Kennedy’s assassination. We’d just seen him in Duluth the previous September when he spoke at UMD.

Back then it seemed like such a long time from that inauguration day to the day he died, but of course in terms of history it was an instant – just over three years. Yet in that brief time I had finished my education, served in the military and started my career. In some ways it was the most important period of my life, just as it was for President Kennedy, and, really, oh so brief a time.

Video footage of the inspirational inauguration speech given by JFK on January 20 1961 may be seen on You Tube HERE.
Posted by Jim Heffernan at 5:14 PM No comments: 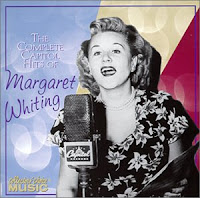 Here’s the opening paragraph of an obituary in the Jan. 12 New York Times:

“Margaret Whiting, a songwriter’s daughter who as a bright-eyed teenage singer captivated wartime America and then went on to a long, acclaimed career recording hit songs and performing in nightclubs and on television, died on Monday… She was 86.” (Read the full obit HERE.)

Sounds like that pretty well sums up the career of Margaret Whiting, a singer not quite in the ranks of contemporaries like Rosemary Clooney and Ella Fitzgerald, as The Times points out, but who nevertheless had quite a career. After all, she introduced “Baby It’s Cold Outside,” in a duet with the distinguished songwriter Johnny Mercer.

Well, it doesn’t quite sum up her career.

Of course you have to be of a certain age and turn of mind to even know Margaret Whiting’s name, not to mention that of Johnny Mercer. But suffice it to say, as The Times did, that “in her heyday she was widely popular in the worlds of big band, jazz, popular music – even country – for more than 30 years…”

The New York Times runs great obituaries of notable people, often including esoteric facts about the deceased that get the attention of obit writers, but they missed one about Margaret Whiting: Her appearance in Duluth – the greatest in her career, according to her.

I was there, at the old Duluth Armory, just a couple of years after Buddy Holly had graced the same stage shortly before he died. (I was there for that, too, as I’ve written so many times I’m getting bored with the story myself.)

Anyway, Margaret Whiting was the featured entertainer at the annual Duluth Home Show held at the Armory each spring in the years before the Arena-Auditorium opened in 1966. I would say I saw her in about 1961 or ’62.

Why dredge all this up now (aside from the fact that she just died)? A lot of people who performed on that stage were better known than Margaret Whiting, after all. I dredge it up because of what she said at the end of her final performance here, the last evening show on the Sunday night the Home Show closed.

In those days, the various booths and displays were spread throughout the Armory floor, and for the entertainment the crowd simply gathered in front of the stage, mostly standing. That’s where a friend and I were for that weekend’s last Margaret Whiting show. Just standing there with a few hundred other people listening to the music and taking in the acts, which probably also included a juggler or an acrobat or a dog act before the featured entertainer, backed by a big band, performed.

Because it was the weekend’s final show, as soon as the house lights went down and performers took to the stage, you could hear sponsors of the various displays across the Armory floor begin to disassemble their booths. The clatter was pretty loud, it seemed to me, making it hard for the performers on the stage to compete.

But Margaret Whiting was a trouper, and she came out and gave it her all. I don’t recall exactly what songs she included but, according to The Times obit, she was associated with “That Old Black Magic,” “Moonlight in Vermont,” “It Might as Well Be Spring” and “Far Away Places,” all enduring standards of the big band era.

But as she performed, beyond the footlights the cacophony of the dismantling of the home show was distracting, with workers paying no attention to the stage show (by then they’d likely seen it about five times that weekend). Still, Whiting sang on, smiling through it all. I recall feeling badly for her. The Armory was a dump to begin with and then to have to perform with all that clatter in the background, well, it had to be disconcerting.

But it never showed. She went through her set, which closed the program, and then stepped to the apron of the stage and addressed the audience. I’m going to put the following in quotes even though it might not be the exact wording. This is pretty much what she said:

“Thank you, ladies and gentlemen. I just want to say before I leave Duluth that this has been the greatest time in my entire show business career.”

How about that? I was stunned. I just can’t understand how the New York Times could have missed this highlight – call it apex – of Margaret Whiting’s career. They should save the Duluth Armory on that basis alone!

Or maybe not.
Posted by Jim Heffernan at 7:32 PM No comments:

Bentleyville's magnificent holiday light display ended for the season on New Year's Day with a  fireworks display. All who witnessed the show were not disappointed. Bentleyville's lighting, Duluth Harbor and Aeriel Bridge lights combined with the fireworks display over the glistening harbor to provide a memorable start to the new year for all fortunate to be there.

Thanks to local freelance photographer, Scott Tchida, for capturing it all in this photo. More of Scott's pictures may be found on his facebook page: http://www.facebook.com/scott.tchida
Posted by Jim Heffernan at 12:29 AM No comments: