Remembering the birth of the DECC fifty years ago... 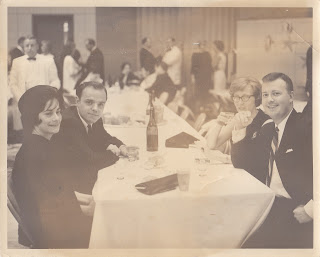 Today the Duluth News Tribune paid homage to the upcoming 50th anniversary of the DECC (formerly known as the Duluth Arena-Auditorium). I was a fledgling reporter in 1963 covering the beginnings of what later became the Duluth Arena-Auditorium. A few years later, in August of 1966, I covered the events of the gala celebration week of it's grand opening. I was asked to recount some memories of that time for the Duluth News Tribune and my recollections are included in a column in today's special DECC edition of the paper. You can read the column HERE.

Pictured to your left is a photo of an event held in the arena that celebration week. I, Voula (my fiancé at that time and now my wife) sat across the table from our long-time friends, Dave and Karen Erickson now living in Denver Colorado. Many TV and other celebrities were also in attendance. 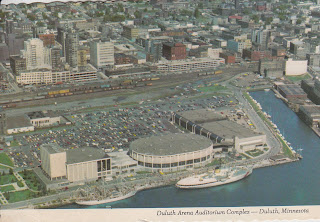 Pictured (right) is an old post card 10 years later (1976) showing the Arena-Auditorium with the Curling Club/Pioneer Hall addition (to the right of the original structure. Docked at the Arena pier on the St. Louis Bay is the Norwegian Training Ship, the Christian Radich of Oslo. A couple of years ago, I was able to again visit that ship docked at it's home in Oslo.

The DECC complex has, of course, expanded and changed in subsequent years. Read more about the 50th anniversary in today's DNT HERE.

Posted by Jim Heffernan at 11:51 AM No comments:

Early morning storms crept into Duluth and area fast and furiously Thursday. Strobe-like lightening flashed every second and hurricane-force winds measuring upward from from 69 mph to 100 mph swept through the area. Lots of trees were uprooted, torn in half or broken off so that neighborhoods hit the hardest had obstructions on roadways, trees on cars or roof-tops and electrical lines catching trees or laying live on the ground. Minnesota Power noted 75,000 were without power in the region, with many still without power even now. The Lakewood pumping station near lake Superior was out of power as well and area residents were asked to conserve water. Duluth was finally getting back to normal after the big 2012 flood so this has hit the city hard.

And, believe it or not, Duluth is having a heat wave. It's 90 degrees right now–hot and humid.

You can read more about it and see video footage of the scenes around town on the Duluth News Tribune website HERE and HERE.
Posted by Jim Heffernan at 4:39 PM No comments: