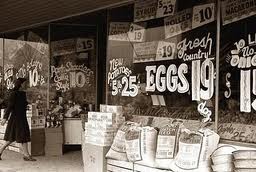 Some readers who also follow my remembrances of growing up in Duluth's West End on Zenith City Online recall my column there about the old corner grocery stores of Duluth's West End's (read it HERE.)

The Duluth Public Library reference web site (see it HERE) just posted about those old corner grocery stores throughout the city. Of course, most of those stores are now gone–replaced by big super markets located far from the old neighborhoods.

Interestingly, Duluth's West End/Lincoln Park neighborhood is now considered a “food desert” because low-income residents without transportation do not have close-by neighborhood stores to buy healthy food any longer. There’s something to the value of the old corner stores!

A lot of readers of the ZCO commented with their memories of those old stores. Do you have any memories to share?

Posted by Jim Heffernan at 12:55 PM No comments:

Iron Will: An actor's life for me? 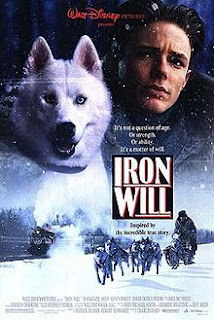 AN ACTOR'S LIFE FOR ME?
Film debut in Disney’s “Iron Will” was beginning and end

I might as well get on the “Iron Will” bandwagon. I too was an asterisk (opposite of star) in the 1993 Disney movie filmed in and around Duluth, recalled here recently with much fanfare on its 20th anniversary.

It all started for me in early childhood when I was taken to another Disney movie, the animated “Pinocchio,” and heard Jiminy Cricket (I had a special affinity for Jiminy Cricket because of the similarity of our first names) sing, “Hi Diddle-Dee-Dee (An Actor’s Life for Me)”.

That did it for me, an actor I would be. But I kept it a secret. None of my friends wanted to be actors; they wanted to be baseball players. I kept my secret for more than 50 years, but when Disney and company came to town to film “Iron Will” I could hide my desire no longer.

I was a newspaper columnist then, and pandered in print until the local casting woman called me an offered me a non-speaking extra role of a “reporter.” That fit. I had been a reporter in real life; still was some of the time.

I humbly accepted her offer and reported for duty on a cold winter morning way before my usual wake-up time. We were bused to a costume warehouse and outfitted in 1920s outfits. Mine was a Donegal tweed overcoat and snap-brim cap. Then they bused us to that day’s film location, Second Street downtown in front of Historic Old Central High School, which doubled for the Winnipeg City Hall of the 1920s.

We reporters – there were a whole bunch of us, not all of whom were the genuine article like me – were given 1920s-style notebooks and placed in the bleachers – a.k.a. reviewing stands – behind what would be the start of the Winnipeg to St. Paul dogsled race portrayed in the film. Then we were sent across the street to the Masonic Lodge basement to be fed and primped. A makeup woman spread Alberto VO hair grease into my thinning hair and combed it into a pompadour to wear under my snap-brim cap, a hairdo that went against every ongoing attempt to cover encroaching baldness.

Finally we were herded to the “set,” facing a usually busy thoroughfare covered that day with trucked-in snow. Several mushers and their teams were lined up in front of us as the cameras were set up at various angles to capture the opening gun of the big race. Dogs barked incessantly. Two horsemen in Royal Canadian Mounted Police uniforms were posted astride their mounts near the old school.

The process seemed to take forever and my feet were getting cold, although that tweed overcoat stood me in good stead. Finally the dog teams took off for St. Paul (really, the end of the block at First Avenue East) and we were almost finished. Almost.

A brief scene involving three or four race officials had to be filmed with the reviewing stand in the background and a several of us reporters were directed to stand behind them pretending to take notes. The noted actor Kevin Spacey was central to this scene. I was with half a dozen reporters grouped around him as the cameras rolled.

Take that, Jiminy Cricket. Wait until they see that in Hollywood.

Thus ended the day’s shooting. We turned in our costumes (the snap-brim cap was my own) and got on with our lives. Then, months later came the premiere, up in Hermantown at the now defunct Cinema I, II, III, IV, V and so on and so forth. I couldn’t wait to see myself on the big screen.

And yes, I saw myself on the big screen. In the long shot of the race’s start, dog teams bounding toward the whirring cameras, you can see me in the bleachers if you are me looking for me. My big scene with Kevin Spacey is in the movie, but without me. I was standing a foot or two out of the shot.

That ended my career in motion pictures. It was memorable, though, as anyone who has read this can see. I recall it vividly after 20 years.

Of all the professional actors in the movie, only Spacey achieved notable stardom. I’m sure he regrets that I didn’t quite make it into the scene with the reporters. I know I do.

A few months later, I got a check from Disney, payment for my services. After cashing it, I saved the stub as proof that I once was in a movie. I’ve still got it here somewhere, I think.

Finally, here’s the bottom line: Hi diddle-de-dum, no actor’s life for this bum.

Posted by Jim Heffernan at 1:52 PM No comments: