I got a real kick out of the NY Times picture of Obama on today's front page. He's visiting a local bookstore on off time from a rally on health care reform in Iowa City and impishly poses with the newly released books by Republicans Mitt Romney and Carl Rowe.  His obvious sense of humor is a welcome sight during this time of unrelenting partisan battles. Click HERE to see the picture.
Posted by Jim Heffernan at 11:31 PM No comments:

Zen and the art of traveling around Duluth during freeway construction...

The Minnesota Department of Transportation has announced a near total rebuilding of the Interstate 35 system through Duluth starting this spring. Officials warn it will cause major traffic disruptions for the next two years and are advising Duluthians to choose routes other than the freeway as they move about and in and out of the city.

Accordingly, the Duluth daily newspaper has published maps and descriptions of routes motorists can take to avoid using the freeway during the lengthy construction period. This is a valuable public service, but naturally the newspaper can’t address every possible alternative route and has asked well-meaning citizens to contribute helpful suggestions on how to avoid using the freeway and still get from place to place in long, narrow Duluth.

As a person who actually lived and drove in Duluth before the freeway was built, I believe I can make a significant contribution to this process, filling in gaps left by the newspaper that will assist drivers in planning their travel throughout the city. Here are a few:

1. Park Point residents should avoid driving into downtown Duluth entirely, since, in an unrelated transportation project, the city has initiated a 10-year plan to paint the Aerial Lift Bridge with a three-inch brush. It leaves only a single lane on the bridge, causing massive traffic backups of unwelcome foreign invaders (meaning non-Park Point residents) intent on fouling the beaches protected in Canon Law and Biblical command (see Deuteronomy) for use only by well-established point residents.

Therefore, residents of Park Point who reluctantly travel off the point now and then are advised to drive to the small airport at the end of the roadway and hire an airplane. For others, who can’t afford an airplane or are afraid of flying, City Councilors have proposed establishing campsites in the old-growth forest beyond (south of) the airport where travelers can stay while workers construct an arc to transport them, together with two of every endangered species on the Point including dune grass and the poor, to Superior.

2. To travel from eastern and downtown Duluth to Proctor (a few dozen Duluthians reluctantly do this each year) people are advised to take Skyline Parkway to Horseshoe Bend (40th Avenue West), south to Grand Avenue (the start of something grand), turn briefly eastward to the former DM&IR (now CN) Ore Docks, climb the ladder attached to one of the uprights just off Grand Avenue and board a train to Proctor.

3. Sickly residents of Gary-New Duluth making emergency runs to the downtown hospitals should access the Munger Trail, where the city will post dogsleds (in winter) and four-wheelers in non-snowy seasons to tow gurneys as far east as the trail goes, at which point paramedics will begin triage and see where it goes from there depending on the patient’s condition.

4. Motorists leaving Miller Hill Mall and heading for Superior should go north on Highway 53 to Virginia, proceed toward Hibbing (avoiding Meadowlands), veer southeast on Highway 73 to Moose Lake, south on I-35 to Hinckley, east on some road there connecting to Wisconsin, north on Wisconsin Highway 35 to South Superior and stop at the Shamrock Pizza for refreshments.

5. UMD and St. Scholastica students from the Twin Cities wishing to go home for Easter or Passover, to engage in a pagan celebration of spring or to have their laundry done, should carpool and travel south on Woodland Avenue, west on Fourth Street, south on 12th Avenue East one block to Third Street, go west on Third Street, cross Mesaba Avenue, proceed through Little Italy to Goat Hill, descend steeply downward to Piedmont Avenue (watch out for mountain goats), head north on Piedmont (skirting just northwest of Goosetown) to Highway 53 (Walter Mondale Boulevard) and follow the same route in No. 4 above, only continue south on I-35 at Hinckley to the Twin Cities metro area to join with others in the metro’s permanent gridlock until a Mississippi River bridge collapses.

That’s about it. Following these simple instructions, drivers should have no trouble at all getting around Duluth for the next two years or Armageddon, whichever comes first.
Posted by Jim Heffernan at 4:28 PM No comments:

Check out these links to today's NY Times...
NY Times front page (click HERE) and the story (click HERE).
Duluth Mayor Don Ness is shown in a photo taking a dip in chilly Lake Superior on the front page today's (March 22) New York Times. It's all about Duluth's bid to secure Google's ultra high-speed broadband network.  Could this mean the lake could now be known as Loch Ness? What a monstrous idea.
Posted by Jim Heffernan at 1:17 PM No comments:

As a friend observed, we're clicking our Minnesota Mukluks and proclaiming that "There's no place like home!" After a longish winter vacation where it usually is warm but wasn't this year, we find that Duluth had an unseasonably warm winter. You might remember the picture our son took of our Duluth home this February while we were gone. The snow cover was amazing. Today the snow is pretty much gone except for a tiny patch. That's amazing too.

Thought you might enjoy seeing the before and after pictures. 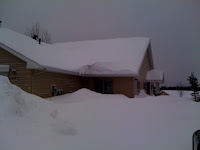 By Jim Heffernan
Many people have inquired – well, one has – in utter confusion about this latest incarnation of “Answer Man” being used by the City of Duluth to promote the Twin Ports’ effort to become some super-duper fiberoptics global Google experimental headquarters, or something like that.
“I thought YOU were the Answer Man,” wrote the lone inquisitor.
I can see where there would be confusion. In the city’s current effort, U.S. Sen. Al Franken introduces a series Duluth-sponsored promotional ads from the mid-1980s in which he appeared as “Duluth Answer Man” in amusing skits answering goofy questions about Duluth. (click HERE)
This needs blog clarification if anything ever did. Yes, I was the Answer Man proxy for the Duluth News Tribune long before the then Duluth Convention and Tourist Trap Bureau (now Visit Duluth) produced Duluth Answer Man tourist promotion ads with then comedian Franken. (A whole lot of “thens” have transpired over the years.)
My Answer Man columns began running a good decade earlier and were printed in the paper several times a year for several years. I was Answer Man’s proxy because Answer Man was described as “really a woman” writing as a man. She answered the questions people were asking about the important issues of the day, most of which were of maximum unimportance to the human race or any other race you want to cite, including the Indianapolis 500 and the Belmont Stakes.
So, clearing up this mystery, yes, there was an Answer Man a long time ago in a kingdom far away and by the inland sea; long before Franken’s Duluth Answer Man reared up in the mid-80s and has been raised from the dead in 2010, a miracle of biblical proportions.
Thanks for asking, though.
Note:  Al Franken gives the green light to use his Answer Man from the eighties to give our area a boost in the contest for Google Fiber Twin Ports. If you haven't seen it, here's the link to see the You Tube video:  Al Franken: On Google Fiber for Twin Ports   Also check out Googletwinports.com.

Posted by Jim Heffernan at 1:00 PM No comments:

It's getting warmer by the Gulf.... 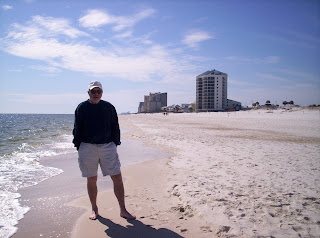 Just checking in to let you know that we're nearing the end of our winter vacation here on the northern edge of the Gulf of Mexico. The weather is slowly making its way to near normal temps here and it's gorgeous today. Just can't beat these beaches!


This is Johnson Beach by the National Sea Shore. 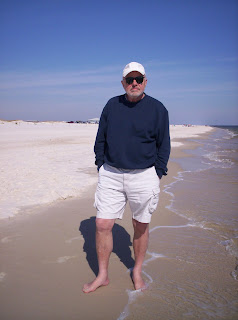 Posted by Jim Heffernan at 11:13 AM No comments:

Toothpaste down the drain:Where's the justice? 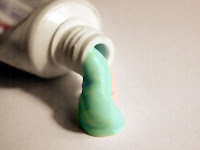 Life is so difficult and challenging that sometimes you wonder how you keep going.

Like when you get up in the morning, stumble into the bathroom, your mouth dry as dead cactus, load your toothbrush down with Crest or Colgate, run cold water over it and – oops – the wad of paste falls off the brush and goes down the drain.

Your eyes are barely open and the first mishap of the day has already occurred. What did you do to deserve this? Where is the justice?

You re-load the toothbrush and go about completing your other morning bathroom duties, start to get dressed by putting on socks, and your big toe pokes out of a hole in one sock. Where did that come from? And where, I ask, is the justice, not to mention replacement socks?

Hmmmm. On with the day anyway. You wolf down some breakfast and head out for work and what do you find on the windshield of your car? Frost, that’s what. Jack Frost has visited overnight, once again thwarting your progress on conquering the day, and life itself for that matter. Your neighbor’s car has no frost; he kept it in the garage. Where is the justice?

You decide to have a glass of wine with dinner, and, opening a fresh bottle, you put the corkscrew in at a bad angle and it pushes the cork down instead of pulling it up, cork crumbs floating on the wine like flotsam on troubled waters. Oh, boy. All you wanted was a relaxing drink, and now this? Where’s the justice?

You turn on the TV news and learn about wars, floods, bombings, street crime, recession, depression, Congress, murder, mayhem, starvation, revolution, and you mutter to your dog, “They think they’ve got troubles. You should see what happened this morning when I tried to brush my teeth. Where’s the justice?”

The dog looks concerned, as well she might.
Posted by Jim Heffernan at 11:01 AM 2 comments:

Email ThisBlogThis!Share to TwitterShare to FacebookShare to Pinterest
Labels: life's justice, toothpaste down the drain

You've probably heard the hype about Duluth's desire to become Google's first fiber optic pilot city. The momentum is mounting as other cities vie for Google's city by city fiber optic connections. Duluth Mayor Don Ness has, with good humor, introduced a video that is funny and also helps keep Duluth in the race. Read about the competition and see the video HERE. It just might just help, so cast your vote on the www.googletwinports.com site and help Duluth win the race!
Posted by Jim Heffernan at 12:08 AM No comments: