We just returned from a short holiday vacation in New York City. New York really is the holiday headquarters for the world, it seems. Santas on every corner during SantaCon (read about that HERE), a cheerful Hannukkah parade down Fifth Avenue... and so much more. Below are some photos.
Enjoy and stay tuned...

Posted by Jim Heffernan at 6:12 PM No comments:

Diane Sawyer sent a "postcard from Duluth" on last night's ABC World News program. She ended the news report with a video of our own Bentleyville, telling the story of how one man's backyard display now graces our town's Bayfront Festival Park. Sawyer also mentined Grandma's Restaurant and their popular onion rings.

I love Bentleyville and Grandma's... but am not a fan of onion rings. I know, it's almost un-American to not like onion rings, but I just don't care for them.  I don't like raisins either and I get a lot of flack from my family about that. My granddaughter, at a recent grandparent's day celebration at her school, drew a picture of me at the dining room table exclaiming, "Ick, raisins!" ...with the whole family surrounding me in disbelief.

You've got to visit Duluth during the holidays for our winter fun activities and for the magic of Bentleyville. This photo (above) was on the Bentleyville web site. Check it out HERE for more photos and information about Duluth's magical winter wonderland holiday display!  Thank you Mr. Bentley!
Posted by Jim Heffernan at 3:37 PM No comments:

Hey... come on out and venture forth in the snowstorm tomorrow (read about it HERE) and come to The Bookstore at Fitgers in Duluth!

I'll be there from 1-2 pm signing books and welcoming the crowd... and would love to see you there!

And... if you're still doing your Christmas shopping, don't forget to stop by and visit Sally or one of her crew at Duluth's only Indie, The Bookstore at Fitgers, and buy my signed book any time. Of course you can also stop by Barnes and Noble you'll find a stock of signed books there as well.

Just in case you're brand new to me and my book, Cooler Near the Lake, here's what has been written about it to catch you up. (Yes, it's shameless promoting... but that's what one's gotta do to sell a book!)

From a recent marketing blurb....
"Cooler Near the Lake is a book that collects 52 of Jim Heffernan’s classic newspaper columns originally written for the Duluth News Tribune (Duluth Minnesota) along with his original writings that set the tone for the columns presented. (Heffernan has since retired as a journalist but continues writing in semi-retirement as a freelancer.) The book is unique in that the short essays provide readers with Heffernan’s wry humor, distinctive perspectives on life, slices of colorful life living by the shores of the largest of the Great Lakes, heart-felt reflective pieces on life in general as well as an unparalleled look at famous people he interviewed or who came through Duluth. The book appeals to readers who enjoy reading an essay at a time in a relaxed setting."
Posted by Jim Heffernan at 5:14 PM No comments:

Email ThisBlogThis!Share to TwitterShare to FacebookShare to Pinterest
Labels: Barnes and Noble, Cooler Near the Lake, Duluth News Tribune, Jim Heffernan, The Bookstore at Fitger's

DATELINE PLANET EARTH (Dec. 22, 2012) --
As predicted in the ancient Mayan calendar, the world ended yesterday when the planet Earth and former planet Pluto collided in the Solar System.

Shortly before Earth was blown to smithereens, officials speculated it was caused by Pluto as revenge for being downgraded from official planet status. President Barack Obama urged calm, as Pluto catapulted toward Earth. Republican leaders in Congress feared the cataclysm might be worse than falling off the fiscal cliff nine days hence.

As a result of the Armageddon, long predicted by religious leaders, ongoing problems on Earth no longer exist on personal, local, national or global levels. Individuals were absolved of all bill paying, crime in cities ended, congressional polarization was vaporized and ongoing trouble in the Middle East and other world hotspots abruptly came to an end. 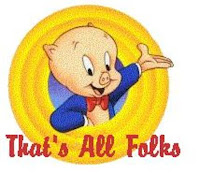 It would have been cause for celebration, except there was nobody left to celebrate.

In the beginning the Earth was waste and void. Now it is only void.

The final words from planet Earth were unaccountably uttered by an anthropomorphic pig: “That’s all folks!”

(The foregoing dispatch was transmitted by the Unassociated Press minutes before the world came to an end.)

Posted by Jim Heffernan at 4:57 PM No comments: