Where have all the pseudo-intellectuals gone?

The Republicans running for president have been fueling suspicion of intellectuals, especially elite intellectuals like the Harvard faculty (as opposed to the first 500 names in the New York City phone book), and, of course, President Barack Obama, a former professor of constitutional law.

Newt “Big Ideas” Gingrich has been particularly hard on the intellectual elite, and also the mainstream media, especially those who bring up his matrimonial record.

Gingrich is almost of my generation, so I believe I understand him better than the other Republicans, although fairly youthful-seeming Mitt Romney is no spring chicken. Ron Paul, of course, is an old rooster.

I do not understand, however, why these conservatives are so resentful of intellectuals, knowing that they are old enough to recall when the real problem – at least it was when I was in college – was with pseudo-intellectuals. That leaves only Rick Sanatorium.

When I trod the halls of academe in the 1960s, such as they were at the Duluth “branch” of the University of Minnesota, pseudo-intellectuals – all male -- were hiding behind every pillar of higher learning. Everybody knew who they were due to certain universal pseudo-intellectual traits obvious to the naked eye as well as those who wore spectacles. This was the immediate post-lorgnette era.

The most obvious trait of a pseudo-intellectual, aside from thinking they were smarter than everybody else, was pipe smoking. No cool guy (i.e. a cigarette smoker) would be caught dead smoking a pipe. Pipe-smoking pseudo-intellectuals also wore horn-rim glasses, made a public display of playing chess and bridge, and – forgive me for this – had unkempt seemingly not recently shampooed hair. You know the hair.

They were also careless about their dress, eschewing the “cool” clothes worn by, say, fraternity men or athletes. Plastic shirt pocket protectors? You bet your ballpoint pen with the piggy back refill built right in. Slide rules were worn in holsters on belt, for quick drawing in discussions on the limits of pi. I hasten to add, though, that their mothers loved them.

So those of us who could not claim to be actual, bona fide intellectuals but didn’t want to be branded a pseudo-intellectual put on a “regular guy” act or whatever passed for “cool” in the early 1960s. The late 1960s were entirely different, but I was well out of the academic environment by then.

Now that so many years have passed, I have been able to track the lifetime records of a few of those we regarded 50 years ago as pseudo-intellectuals. Most have given up the pipe and chess, but bridge might be a pastime that endures with a few. Some of them actually made intellectual status and enjoyed continued academic life on faculties while retaining many of their own (faculties). And a few made big bucks and have become philanthropists and pseudo-philanthropists with their names on college buildings.

As for me, I am writing a book I will call “The Old Man and the C”. You just read the introduction.
Posted by Jim Heffernan at 6:58 PM No comments: 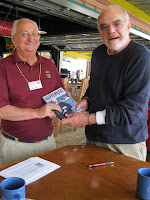 What do Minnesotans do when they vacation in warm climates during the winter?  They form "Minnesota Clubs" and get together with others hailing from Minnesota and who are all thrilled to enjoy a break from a long and snowbound winter back home.

I joined around 300 Minnesotans at Lu Lu's in Gulf Shores Alabama for the first time to enjoy one of the weekly Minnesota Club breakfast meetings. By the way, no membership is required to join... only that you are from Minnesota. It's a rather strange phenomenon to drive into Lu Lu's parking lot in southern Alabama and find that every single car in the lot sports a Minnesota license plate.

I was invited to hawk my book, along with other Minnesota authors, in a "Minnesota Author's Day" program at one of the recent breakfast meetings. Of course, I never turn down a fun time... or  an opportunity to sell my book, Cooler Near the Lake. That's Roger from Ely pictured above buying my book. Thanks Roger.... and I had a fun time! 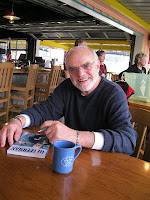 And now it's time to head north. Rumor has it that the weather in Duluth has been unseasonably warm, with temps near 70 today. And I heard that the temps in Minneapolis might have reached 80 today. Unbelievable!  I guess we don't have to travel south to take a break from winter.

Jim
Posted by Jim Heffernan at 12:31 AM No comments:

Be sure to tune in to Duluth's WDSE-TV this Thursday (March 8) at 8:30 p.m to learn about a part of Duluth's history–now vanished–in what promises to be a most interesting documentary.

Local author/publisher, Tony Dierckins, and local historian, Mary Ann Norton, have collaborated on Lost Duluth, the book upon which this documentary is based. Lost Duluth (the book) will be launched and available for sale on May 1. Over 400 pictures and sketches of buildings, homes and landmarks noted in Duluth's history and now vanished will be unearthed in the pages of the book.

The book comes out in May, at the same time Dierckins' local publishing house, X-Communication, unveils a major transformation when X-Comm becomes Zenith City and Zenith City Online is launched. More about this exciting new venture will be announced soon.

To learn more about Lost Duluth, check out this web site: http://www.x-communication.org/xcomm/books/lostduluth.html
Posted by Jim Heffernan at 11:18 PM No comments:

Cop shop memories: If the walls of the vacated Duluth police headquarters could talk...

So, the Duluth Police Department has moved out of its long-time headquarters in City Hall. It’s the end of an era. I hate to put that in such a clichéd way, but it really is, after some 80 years in that location.

I used to spend quite a bit of time in what we at the Duluth newspaper across the street called “the cop shop.” Around the newsroom it never was referred to as police headquarters verbally. It was only called that in stories.

Newspapers, and Duluth’s was and is no exception, get a goodly amount of the news they report out of the cop shop, and its offshoot the courts. Accordingly, reporters are regularly assigned to cover police activities almost exclusively.

The “police beat” was usually given to the younger, more eager reporters back when I started my journalism career in the early 1960s. I always enjoyed covering the police, which, on most days, was fairly routine. But every once in awhile it would get hot, and then it was really interesting.

Routine coverage involved a reporter trudging across the street to the cop shop a couple of times a day and engaging whatever officer was manning the desk -- the “desk sergeant.” He took all the calls from the public. These were sometimes cops who had been injured or ailing or getting older, but some seemed to enjoy it and did long stints behind the desk.

At one end of the elevated desk where the desk sergeant sat was a lined ledger into which every call to police was recorded. This was known as the “kick book.” It was public record and the news media’s main means of finding out what was going on with the police. The desk sergeant would write the name of every caller and what that caller had said. The book also included the comings and goings of the various squads and suspects booked into the city jail so as a reporter you could get a pretty good idea of their activities.

Ninety-five percent of the stuff in the kick book was not news, but if something really important and newsworthy had happened, it would be recorded there unless it wasn’t recorded there. There were times when things didn’t make it into the kick book in a timely manner.

You get to know a lot of cops when you are the police beat reporter. Some are friendlier than others. There is natural tension between police and journalists that must always be bridged. Sometimes they don’t like it when the public’s right to know supersedes their desire to say nothing and just get on with their investigations.

I had several memorable moments in those City Hall quarters the police are now leaving – some of them involving tragic occurrences in people’s lives. There were times when you didn’t even want to go back to the paper and report things, knowing how it would affect the lives of those closely involved.

During one period of my reporting career I used to have a mini press conference each day at 10 a.m. with the chief of detectives. We usually just sat and chatted when nothing much was going on. But I’ll never forget one day when he said he didn’t have anything for me, but Superior police were holding a very prominent Duluthian on a morals charge. It ended that person’s career.

There were amusing times, too. One Sunday morning when I went in to check the kick book, I ran into an officer from my National Guard unit, wearing a disheveled tuxedo, there to bail out of jail his newly minted son-in-law who had, shall we say, misbehaved at the wedding reception the night before. The bride was not in sight. (This was not news, by the way. Family troubles usually were not news.)

I could go on and on with tales of murder and mayhem – yes mayhem -- but I’ll relate just one more memory from my days at the cop shop. One of the detective inspectors was retiring and I was assigned to do a story on his career. I had known him quite well and enjoyed sitting down with him for an interview. He’d been on the force for decades and, he said, “I never fired my gun.”

Wow. I made that a big part of my story.  Retiring veteran police officer never fired a gun in 30 – or however many – years of police work. Good angle.

A long time later, I think after the retired cop had died, I happened upon an old Duluth newspaper from the 1930s reporting that this same officer had engaged in a wild motorcycle chase of some suspects in which volleys of gunfire had been exchanged.

Hmmm. Never fired his gun, huh? Must have forgotten.

I began with a cliché, so I might as well end with one. Regarding those first-floor City Hall offices the Duluth police are vacating? If those walls could talk…
Posted by Jim Heffernan at 1:55 PM No comments: