I got a request from the Duluth News Tribune to offer their readers my hopes and predictions for the new year. Here they are....

I'll be doing my last holiday book signings at area booksellers this weekend:
*  Grandma's Marketplace tomorrow (Saturday–December 20th) from 1-2 pm
and
*  The Bookstore at Fitgers on Sunday–December 21–from noon-2 pm. (Snowstorm make-up session)
Hope to see you there!
Posted by Jim Heffernan at 10:58 AM No comments:

I'm a writer, not a performer, OK? Some who write are so at ease speaking in front of folks. Not me. I guess I'm basically shy. My wife says I'm a shy Swede. Our family all did the Myers Briggs tests and I am, of course, an "I" (Introvert). Two in my family members are "E's" (Extrovert) and two of us are "I's"
I'm bearing my soul to you today to tell a little known fact about how shy I am.  It's hard for me to "be on" and in the spotlight. I like the kind of spotlight where I can hide behind my writing…sort of in the dark. I've turned down offers to speak before groups or appear regularly on TV because–I just can't do it. This book I have out forces me to be in the spotlight a bit, if I am to do what is expected to sell books. There have been newspaper interviews, of course. But I have had to take a big gulp and be in the spotlight as a guest on a couple of radio and TV programs in order to get the word out about the book.
Today I was on the "Help Me Rhonda" show on KDAL radio–610 AM– from 1-2 PM. Honestly, Rhonda Grussendorf did help me–so the name of her program has credibility with me. She is a pro and made me feel so comfortable that I actually enjoyed the interview, despite the fact that I was in the spotlight and on the air. Hope you were listening today. It was fun and she relaxed me enough to get me to tell about some interesting tales of my work at the DNT and a bit of background about the book. You did "Help me, Rhonda!" And so have the other radio and TV personalities who interviewed me. They are all pros and I don't know how they do it! But that doesn't mean that I've changed my ways. Half of my family understands and the other half knows what it is like. Is there any one else out there who understands?
So…now it's back to hiding behind my writing once again...
Posted by Jim Heffernan at 9:44 PM 3 comments:

It's a white out and a cozy day to stay inside. Hope you're enjoying your time with family, watching the big game, or just hunkering down with a good book. Hmmm....what new books might be out this season that would make good winter reading? (It's shameless, I know, but there are a lot of books to sell!) Anyway as those of you in our Duluth area might guess, most everything has been canceled, including skiing at Spirit Mountain and my book signing this afternoon at The bookstore At Fitgers.
Our son was out snowshoeing by his home earlier and told us it was not fit for man nor beast to be out and recommends we all stay inside. He took a picture from his front window (below) to prove white out conditions. You cannot see the street or house across the street. Our front door was blocked by a big snow drift this morning and we can't see the homes down from our hillside perch either. So…if you have a good book to read (hint, hint) this is the time. Enjoy our first big winter storm! 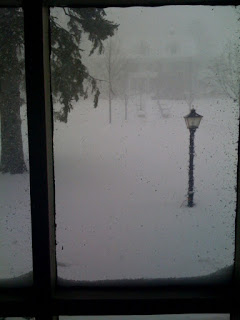 Posted by Jim Heffernan at 2:18 PM No comments:

Thanks to all who came to visit and check out my book on Saturday during my Iron Range tour of bookstores.  What a warm and inviting experience it was to meet so many wonderful readers and enjoy the hospitality of gracious Iron Range/Grand Rapids booksellers. Tony Dierckins, my publisher and author of Crossing the Canal,  joined me for this tour. If you have not seen Tony's book, be sure to check it out. The "bridge book" is the definitive book about the aerial lift bridge and filled with history, folk lore and gorgeous pictures. Just a great book!
One of our visitors was Iron Range columnist and author, Aaron Brown. Aaron is a most talented young writer. I've been enjoying reading his new book, Overburden, and would highly recommend it. Aaron and I have some things in common besides our column writing. He is the father of three young boys–two are twins–and I am the grandfather of twin boys. It's lots of work but so much fun–and we all know "it takes a village" to raise twins. Thanks for stopping by, Aaron!
Posted by Jim Heffernan at 11:02 PM No comments:

Note: Here's a Christmas column I wrote two years ago. It seems to have continued relevance in today's world. We can only hope....

This is the 34th Christmas that I have been writing a column in this newspaper. I’ve about run out of my own Christmas memories to share with readers – childhood recollections of celebrations with family members long gone, or memories of Sunday school holiday programs enacting the nativity (always a shepherd, never a wise man).

So today, Christmas Eve 2006, I share this space with an old fellow who knew a little something about Christmas – actually the meaning of Christmas. Most readers recognize his name – Henry Wadsworth Longfellow – as one of America’s revered poets of the 19th century, but very much out of fashion today.

One of his poems, a series of reflections on peace on Earth, has been set to music with at least two melodies familiar to dedicated carolers. Longfellow has been dead as a doornail for 124 years, so he qualifies as a sort of ghost of Christmas past whose verses reflect all too well Christmas present and some hope for Christmases yet to come -- ideas so nobly advanced by one of Longfellow’s English contemporaries, Charles Dickens.

What follows are Longfellow’s rhymed words in italics, and some prose comments from me in regular type after each verse.

I heard the bells on Christmas Day,
Their old familiar carols play,
And wild and sweet,
The words repeat
Of peace on Earth good will to men.

Last week I heard a radio interview with a stateside U.S. Army officer of field-grade rank who spent last Christmas in Iraq. He said spending the holiday in a war zone has forever altered his attitude toward Christmas. “Peace on Earth good will toward men” means nothing to him anymore, he said on National Public Radio.

I thought how, as the day had come,
The belfries of all Christendom
Had roll’d along,
Th’unbroken song,
Of peace on Earth good will to men.

“Belfries of all Christendom…” Wow, what a powerful image -- thousands of church steeples, their bells resounding in unison. I grew up in a home midway between two long-gone Duluth Catholic churches – St. Clements and Sts. Peter and Paul -- with belfries and bells that rang out twice a day, noon and evening, throughout the year. What a wonderful, hopeful sound. Broken now. Years after Longfellow’s day, during World War II, a lot of the bells from belfries overseas were melted down to make cannons, which brings us, with trepidation, to the next verse:

And in despair I bow’d my head:
“There is no peace on earth,” I said,
“For hate is strong
“And mocks the song,
“Of peace on earth good will to men.”

A couple of headlines in the New York Times caught my eye last week. “Attacks in Iraq at record level, Pentagon finds,” read one; “President wants to increase size of armed forces,” read another. It’s the same every day in that and other papers, with no end in sight. The words in that verse are, perhaps, the most prescient of Longfellow’s thoughts. Would that these next were:

Then pealed the bells more loud and deep,
“God is not dead, nor doth he sleep;
The wrong shall fail,
The right prevail,
With peace on earth good will to men.”

We can only hope.
origninally appeared in the Duluth News Tribune on December 24, 2006 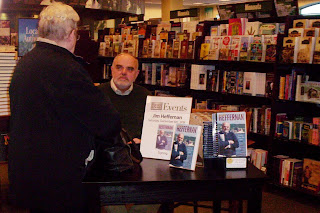 Thanks everyone for dropping by Barnes and Noble on Saturday.
It was fun to visit with you...and nice to see the book is selling!
I have two more book signings coming up in Duluth:
* The Bookstore at Fitgers on Saturday, Dec. 14 (noon-2 pm)
* Grandma's Marketplace on Sunday, Dec, 20 (1-2 pm)
and...
* Iron Range and Grand Rapids book sellers on Dec. 13.
Hope you can drop by!
Posted by Jim Heffernan at 1:20 AM No comments:

Today I received an e-mail from a friend who told me that another Jim Heffernan (a good 10 years younger with a different middle initial... and probably a bit more of a trouble maker than me) was in the court log in Friday's Duluth News Tribune for an open bottle charge. The friend told me that lots of folks working at the DNT who don't know me well think it's me. I was reminded of a similar circumstance when a number of years ago perhaps the same guy was in the paper for beating his wife or something terrible like that and my wife was (eventually) told by a few of her colleagues at her work that they all thought it was me. She was told that each time they saw her, they felt sorry for what she had to endure at home. She is retired now but worked as a school social worker and it made the whole story more exciting for those folks. When the truth came out, they explained that their whole team of teachers at that one building thought it was me and had a scenario concocted about the social worker who helped others but had to go home to an even more awful situation. They all got some chuckles over it later but, golly.... here I am this "mature" guy who lives a pretty "regular" life and to think I have this aura of  renegade  geezer surrounding me. So– to set the record straight–it's not me in the court log, I promise!
Posted by Jim Heffernan at 1:52 PM 2 comments:

Hey–glad to have received a good chuckle from my fellow blogger, Mel Magree, on his Irregular Blog site upon reading my latest satire (below). Be sure to check out his blog as I guarantee you his writings are always erudite and interesting.
Posted by Jim Heffernan at 1:47 PM No comments: