By Jim Heffernan
I had to miss the gathering at Glensheen marking the 150th anniversary of the first publication of the paper that became the Duluth News Tribune. I would have liked to have attended, since I spent nearly a third of those 150 years —my entire career — in various news room positions at that newspaper and its sister, the former evening Duluth Herald.

Some people might regard local newspapers outside of the larger metropolitan areas as the backwater of journalism, and in some ways they are. But for most of my journalistic career Duluth was the third-largest city in Minnesota. It could not be ignored by politicians and other leaders, nor was it ignored by the entertainment industry, including visits by Elvis Presley (more on that later) and other top-name entertainers.

I had a varied career at the Duluth papers, as a general assignment reporter (which means you walk into work every day not knowing what you’re going to cover), beat reporter (education, city government, politics), city editor, arts/entertainment editor-writer and finally on the editorial page convincing half of the readers we were a Republican rag and the other half a Democratic diatribe. During much of that time I was also a general columnist.

For being in the so-called backwater of newspapering, you meet or cover a lot of people from every field of endeavor, some well known, others ordinary people in extraordinary circumstances, and still others in the most dire of circumstances, victims of fatal traffic accidents, drownings, murder. You name it.

Looking back on it all, I think I enjoyed my first job the most — general assignment reporter. It meant working nights and being available for anything deemed newsworthy by the city editor. In those days the paper’s circulation covered the territory from Ironwood, Mich., to International Falls, and everything in between in the upper, upper Midwest, including Duluth, Superior and the Iron Ranges (there were two, Mesabe and Gogebic).

So a lot can be happening that’s newsworthy on any given day that, as a general assignment reporter, you might be assigned to cover. I have many memories of that period, some of which might resonate today. Mainly, you meet a lot of people you wouldn’t have met if you’d gone into some other line of work — some of them quite noteworthy.

One Saturday in the 1960s, for example, I was told to go over to Hotel Duluth and cover a press conference for Walter Mondale on the weekend it was announced he had been appointed to the U.S. Senate by Gov. Karl Rolvaag, also in attendance. Mondale had been Minnesota attorney general and would succeed Hubert Humphrey in the Senate because Humphrey had been selected as President Lyndon Johnson’s vice presidential running mate. Humphrey, of course, showed up many times over the years. I had a working lunch with him one noontime in the old Duluth Athletic Club, and always got a Christmas card from him and Muriel.

Mondale came back 20 years later, as vice president, for an interview with the editorial board on which I sat. Quite a few more miles on him since that Saturday in Hotel Duluth in 1964. He was running for president against Ronald Reagan, who, to my knowledge, never came to Duluth.

Then there are those days when, from out of the blue, you become involved in an unfolding story linking someone from around here to national headlines. The most vivid of those in my memory was the time the Associated Press reported that a U.S. military member from Superior had been arrested in Europe for treason, charged with passing American secrets to the Russians. It was the height of the Cold War.

Hmmm. Nobody around here knew the man’s name (I still recall it but won’t use it), so I and our Superior reporter, Richard L. “Scoop” Pomeroy, began looking for anything about him in Superior. We found his picture in a high school yearbook in the public library, went on a couple of hunches Pomeroy had, knowing Superior like the back of his hand, and ended up finding the alleged traitor’s elderly mother scrubbing the floor in a Tower Avenue cafe after hours.

Somehow we got in, and Pomeroy approached her, asking if she was so-and-sos mother. Yes, she was. Did she know her son had been charged with betraying the country? No she did not, and her reaction was what might be expected. Such a sad scene, it is vivid in my memory 50-plus years later. The other side of general assignment reporting.

You meet a lot of famous, or formerly famous, people in this backwater. One noon I had a hasty interview with Eddie Rickenbacker, who had been one of the most famous Americans of the 20th century, a war hero and race-car driver. Here to address a service club, I cornered him in advance to ask what he was going to say because I couldn’t stay for the meeting. “Get out of the U.N.” the conservative ex-hero growled.

Louis “Satchmo” Armstrong also showed up here in the ‘60s to do a show at Denfeld Auditorium (this was before the DECC was built) and I was sent over to Hotel Duluth (so much happened in that hotel) to interview the famed jazzman. He was so uncooperative I couldn’t get a story out of him (we were in his suite where he was dining on pork chops and vanilla ice cream). Thanks Satchmo.

Over at the Radisson Hotel a few years later I had lunch with a much more cooperative luminary, actor Gregory Peck, best recalled today as the man who personified Atticus Finch in “To Kill a Mockingbird.” Looking back, I might have been talking to Atticus himself, Peck was so warm and reasoned. He invited me to visit him and his wife in Los Angeles. I promised I would but went back on my word.

Nobody knows who Dimitri Nabakov was, but his father Vlaidmir Nabokov is pretty well known to the well read. The younger Nabokov was in Duluth to perform with the Symphony as a baritone soloist in some oratorio. I spent part of an afternoon with him in my office at the paper, me wanting to talk about his father, the “Lolita” author, and he plugging the oratorio. Nice guy, though. And not a bad singing voice.

In my active years at the paper, I met or interviewed every Minnesota governor, every U.S. Senator, two congressmen from this area (that’s all there were in my active years), all Duluth mayors, Superior mayors and other Wisconsin political leaders (I’m talking about you Alvin O’Konski) and a whole host of personages too numerous to mention who had their moments in the sun, and have now faded. Among Minnesota governors, Rudy Perpich was the most fun and Jesse Venture the most intimidating. He refused to tell me his real name when asked. (It’s James Janos.)

Paul Wellstone showed up about once a year before and during his tenure in the U.S. Senate, always deeply concerned about the downtrodden. He had an appointment to meet with us in the afternoon a few hours after he died in a plane crash on the Range.

The sun still shines, sort of, on Elvis Presley, who came here twice in the last year of his short life. I stood face to face with him in the Radisson lower parking lot on one of those occasions but couldn’t get him to say a word. Alighting from a Cadillac limo, he just stood and smirked until somebody opened a nearby service door and away he went, taking some of the final steps of his storied career.

You get into courthouses quite often when you are a reporter. I covered the trial of a prominent Duluth insurance executive who had bludgeoned his wife and who, upon being declared guilty, folded into the fetal position in the lap of his attorney, moaning. Not a pretty sight; one you remember. It was said years later, after serving prison time, that he had his cremated ashes dumped from a plane on the St. Louis County Courthouse. None landed on me but I was across the street at the paper.

Another time I was sitting in the back of a courtroom just to rest on a hot afternoon when they drew a guilty plea for shoplifting from a local doctor who had treated me as a child. It made me feel terrible.

There can be action, too, at times in the work life of a reporter. I remember driving a press car through the bumpy backroads of the broadcast tower farm atop Duluth’s hill in pursuit of a confused moose so our photographer, riding shotgun, could get a photo. He got the photo; I got a memory of just another day on the job as a general assignment reporter.

Of course, every day wasn’t exciting or even interesting. You do a lot of drudge work in newsrooms too. Before the paper turned obituaries over to the advertising department, reporters wrote them. I have sent hundreds to their rewards after a final mention in their local paper, including my own parents. Pretty soon I think I’ll write my own, just to stay in practice.

Regular news reporters also helped the sportswriters when the Friday night lights were beaming down on football fields across the Northland. I know almost nothing about sports, but managed to put together passable accounts of games described on the phone by excited or disappointed coaches enlisted to call us. My one foray into sportswriting. 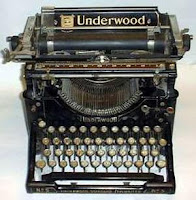 Well, this is getting long. I’ve got to say, though, that sometimes I think I’d like to go down to the paper again, find my old newsroom desk, crank a sheet of paper into a mechanical typewriter, set the margins, and start banging away on some story…any story.

But wait. “What’s a typewriter, Grandpa?”

I hope that child’s child doesn’t have to ask “What’s a newspaper?”
Posted by Jim Heffernan at 7:09 PM No comments: