Severity of blizzards increases over time...

As this is being written (midday Feb. 29), the Duluth area is being hit by a massive blizzard with near-hurricane-force winds, heavy snowfall, drifting and disruptions to civil society – nearly everything is closed down. Of course you knew that if you live anywhere near the Head of the Lakes.

And as this is being written, I am sitting in a high-rise condo overlooking a wide sandy beach on the Gulf of Mexico as it laps the shore of Florida. It could be sunnier, but the temperature is in the low 70s.

I’d rather be in Duluth.

Call me crazy, but I enjoy the excitement of blizzards. The hunkering down, the challenge of moving about the city. If it’s not impossible to plow through the drifts and deep snow or to see out the windshield due to whiteouts, I like to slip my SUV into all-wheel drive and ride around in major snowstorms.

That’s how crazy I am.

So enjoy, those of you who might read this before it ends, and be grateful after it is over that you survived what certainly will be remembered as The Great Leap Year Blizzard of 2012.

All of that said, I hasten to remind that, while I am some 1,300 miles due south of Duluth, I pretty-much know as much about what is going on there -- snowfall rates, wind speeds, school closings, highway closings, bus service cut back -- as Duluthians do, thanks to the Internet.

Call it the information age.

But sometimes I look back nostalgically on earlier times in my life when the Weather Service (it was a Bureau then) did not see these storms coming from a thousand miles away and give warnings days in advance of their impending, then imminent, arrival. No weather satellites, no Doppler radar, no Internet to spread the word. We had radio, but it only kicked in after the snowstorm had begun.

One of the joys of blizzards in those days was that they could surprise you. I can recall going to a movie on an ordinary winter night and walking out two hours later into a raging snowstorm I had no idea was coming, placing in doubt my ability to make it home that night (I always did).

One time as a child I was Christmas shopping downtown with my mother at the old Big Duluth clothing store. When we walked in, things were normal. When we came out, the evergreen holiday decorations strung over Superior Street in those days were wildly swinging, blinding snow obscured visibility and we hastily caught a bus home. Walking up hill from the bus stop to our house, all was quiet, except for the wind. No traffic. We walked up the middle of the street in ruts vehicles made before the hillside street became impassible to uphill traffic.

I think the dearth of warning and the excitement of suddenly being on the receiving end of a major snowstorm in those days is responsible for all those stories told by the older generation starting out, “This storm is nothing. Why, when I was a boy…” It could be a girl.

Some people will remember this Leap Year storm for the rest of their lives. And it likely will get more severe as the years go by.

Like the night as a child when I was Christmas shopping with my mother and… Well, there it is.

Enjoy today, you Northland denizens. And remember it in the future. Don’t forget to make it better. I’ll be back mid-March so there’s hope we’ll get another before spring ruins everything.

If you want to see a great video of the blizzard taken earlier today, click HERE to view John Meyers' Duluth News Tribune story.
Posted by Jim Heffernan at 1:33 PM No comments:

Me and Dmitri and Vladimir and Luciano 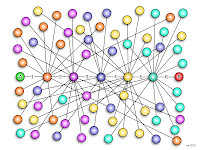 I frequently think in terms of degrees of separation between people. The reigning theory is that everyone is about six steps away, by way of introduction, from any other person on Earth -- the famous “six degrees of separation.” Within the United States only about four people stand between you and, say, George Clooney.

But enough introduction. Now for the meat. Dmitri Nabokov died recently in Switzerland at age 77. He was the son of the famous writer Vladimir Nabokov, author of “Lolita,” on every list of the greatest novels of the 20th century. When you read it you know why.

That was very much on my mind 35 years ago or so – it was in the mid ‘70s – when Dmitri Nabokov showed up in my office at the Duluth News Tribune where, at the time, I was in charge of arts and entertainment coverage.

Aside from being the son of Vladimir Nabokov, Dmitri was a classical singer, appearing in operas and oratorios in Europe and America. He was in Duluth to perform with the Duluth-Superior Symphony in one of its big choral presentations; I can’t recall which one. Symphony management wanted to drum up ticket sales, so they sent their not-so-famous bass soloist to the newspaper for an interview.

I recall almost nothing about what we talked about, but I do remember sitting across from him and thinking how amazing it was to be chatting with the son of Vladmir Nabokov, one of the greatest writers in English after an earlier career as a writer in Russia, where he was born.

Dmitri was quite tall and thin, in contrast to the images of his portly father in photographs. I recall, too, that he sang reasonably well, but nothing special. He was a well-trained singer who could hold his own on any classical stage without setting the world on fire.

So, I met him, and if you’ve met me, then… Well, you know the degrees of separation.

In its obituary for Dmitri last week, the New York Times (byline: Daniel S. Slotnik–read here) opened another degrees-of-separation door to me. It said as a young singer, Dmitri made his operatic debut in “La Boheme” in Italy with Luciano Pavarotti early in Pavarotti’s career.

Well now, let’s count those degrees of separation: You, me, Dmitri Nabakov, Luciano Pavarotti. Three for you, two for me.

How can I miss?
Posted by Jim Heffernan at 2:55 PM No comments:

A Kennedy affair to remember–even in Duluth...

Still another of President John F. Kennedy’s extra-marital girlfriends – some call them mistresses, quite accurately it turns out – has written a book about their affair that is being published this month.

This one, Mimi Alford, was a 19-year-old White House intern in the summer of 1962, and, according to reports on her book and news media interviews with the author, had been intimate with the president within a week of joining the White House staff.

She kept the secret to herself and a few others for decades, but now has decided to tell all, and, according to reports, she has quite a bit to tell. I haven’t read the book, but only these accounts.

During that time she reports she traveled often with the president, quietly staying in the background. You wonder if she was with him in Duluth.

In September 1963, just two months before he died, Kennedy visited Duluth, with great fanfare. Thousands of older Duluthians remember that day, but their ranks are thinning. I remember it very well, and have written about my “big” role in the visit in the past. I was a 23-year-old Army National Guardsman, recently returned from boot camp, conscripted along with the others in my unit to “guard” the president.

After he landed at the airport (his limousine – the one he was assassinated in – had been flown in the day before) his motorcade made its way to downtown Duluth where Superior Street was lined with thousands of people eager to catch a glimpse of the president. When he arrived it was evening and raining, so the Lincoln limo had a transparent top attached as it made its way from about Fifth Avenue West to Third Avenue East.

As luck would have it – and it was pure luck – I was stationed on the sidewalk right outside Hotel Duluth (now Greysolon Plaza), where the president stayed overnight, as part of a cordon of Army guardsmen standing shoulder to shoulder to keep the crowd back. Interesting duty. There were perhaps 16 of us, with the rest of the unit standing curbside all along downtown Superior Street in front of the crowd.

So I got within about 10 feet of Kennedy as he stepped out of the limo and walked into the hotel, smiling and waving to the crowd. Wife Jackie was not with him on this trip. Was Mimi Alford? In researching her book at the Kennedy Library she found Air Force One travel manifests for the period where her name appears among the passengers. I suppose somewhere there’s a record of who was on the plane when it flew to Duluth.

Reading about her experiences dredged up some of my long-ago thoughts as I watched the smiling chief executive walk alone across the sidewalk at Hotel Duluth. He was the first president I was old enough to vote for. Just about everybody my age, and plenty of older voters, were gaga over this handsome young leader with the beautiful wife. It took a pretty staunch Republican to resist him, although his victory over Richard Nixon in 1960 was narrow.

At the time it was inconceivable that an ordinary American, like myself, would suspect the president of having an affair, or many affairs, with at least one of his illicit companions still in her teens. Here was a political god whose rectitude was unquestioned at the time. I was surprised when I stood near him that he wasn’t 10 feet tall.

Learning something about this latest paramour in the past few days, I came to realize that at the time of the affair, when she MIGHT have visited Duluth with Kennedy, she was around 20 years old. The president was running around with girls younger than those of my own precise generation? Unbelievable.

It brings to mind a scene from the 1982 movie “Diner” in which a group of street-wise Baltimore boys exiting their teens in 1959 hang around a favorite diner and discuss their drab inner-city lives. In one scene, two of them are walking outside the city along a rural road when they see a lovely, obviously wealthy young woman in riding clothes, trot by them on horseback. “You ever get the feeling that there’s something going on that we don’t know about?” one of the Baltimore boys asks his companion.

Well, as for me, yeah, I get that feeling now and then.


For a look back–when JFK arrived at the Duluth International Airport on September 24, 1963 to speak at UMD the following day (September 25)–check out this News Tribune Attic post of April 21, 2009 HERE.


And... for  more information about the new memoir of JFK's intern, Mimi Alford, check out this NY Times opinion piece by Liesl Schillinger published on February 11, 2012 HERE.
Posted by Jim Heffernan at 3:22 PM 2 comments: