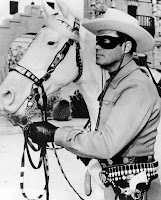 The following column appeared
in the Duluth News Tribune on Sunday, May 17, 2020


The Lone Ranger Rides Again
By Jim Heffernan
When I was a child growing up in Duluth, the Lone Ranger, who always wore a mask over his eyes, was my favorite cowboy. In those pre-television days he was on the radio right around suppertime, and my family would listen on the kitchen radio as we ate.

Each segment of the Lone Ranger ended the same way. After performing heroic deeds with his faithful companion, Tonto, the two of them would ride off — into the sunset in our imaginations — to the tune of the stirring William Tell overture, and some character left behind would ask: “Who IS that masked man,” and a companion would say, “That’s the Lone Ranger,” as the music swelled into a crescendo behind the thundering hoofbeats of the great horse Silver. Thrilling.

For a time, the Lone Ranger galloped through all of our evening meals as we gobbled down our pork chops or chop suey or meatloaf or Italian spaghetti with Swedish touches or whatever. A lasting memory. It was around 70 years ago, give or take.

Segue to the present: Of course the mask of the masked rider of the plains covered his eyes, leaving his mouth available for dialogue. Now I’m wearing a mask that covers the lower half of my face, my eyes free to gaze on a pandemic-stricken world more perilous than anything the Lone Ranger ever faced. At least he could see the bad guys.

I have a multi colored mask donated by a friend who is handy on the sewing machine. I wear it when I move about in public, which isn’t much, but enough to notice that, if I am in a store, many of my fellow-shoppers are not wearing masks. These are often serious-seeming men who look like they believe they could fight off with their fists or maybe a gun any corona virus or anybody or anything else that might challenge them to cover their mouths.

And there I am with my cute little blue-and-white cloth mask, trying to stay a safe six feet away from these unmasked riders of the purple rage. And it makes me feel like a chicken. Yes, a dreaded chicken, a fraidy cat.

I don’t know if the appellation “chicken” carries the weight in did in my Lone Ranger days and beyond into the teen years. But no male — this is totally male, no females involved — could survive comfortably among his peers if he was known to be a chicken.

It was quite easy to become known as a chicken. All you had to do is back down from the threats of a bully in a schoolyard confrontation. Chicken for life. Most boys are pretty scared when confronted with schoolyard fisticuffs but many will go through with it because they don’t want to appear to be — yup, here it is — a chicken.

I managed to make it through my youth with my reputation intact just by avoiding confrontations. I don’t think anyone I knew thought of me as a chicken, whatever else they might have thought of me.

So now, for the first time in my long life, I feel like a chicken when I’m out and about during this pandemic wearing a protective mask when so many others are not. Macho men aren’t the only ones. Many women avoid wearing them too, although unscientific research (entirely my observations) indicates more males eschew masks than females.

There’s irony in the fact that people wearing these makeshift masks are protecting others around them from being sprayed with COVID19 should an infected mask-wearer cough, sneeze or even breathe in the under-six-feet vicinity of people.

What strange challenges this pandemic is presenting all of us. And now it’s even become political with claims that people wearing masks are anti-Trump and those who don’t wear them support the president. Could be. I know of one case where it’s absolutely true.

We all wonder where all this will end. Will it end with a wonder drug that knocks it out of everyone? Will it end at the cemetery for far too many people, just as it already has? Will it end, as the poet said, not with a bang but a whimper?

No answers yet, of course. In the meantime, I’ll keep wearing a mask out in the hostile world, imagining that somebody, somewhere might say as I plod away, “Who IS that masked man?” And the answer might be, “Just some lily-livered, chicken-hearted geezer who’s afraid of his own shadow and a little corona virus you can’t even see.”