Swearing, but not on a stack of Bibles... 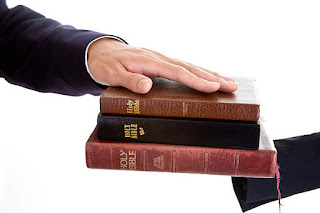 Written by Jim Heffernan for the Duluth News Tribune/September 4, 2021

Driving along a well-traveled highway a few miles north of Duluth on a recent beautiful summer Sunday afternoon, I spotted a home-made, fairly large sign in an unkempt yard with two words: The first was a vile four-letter word starting with F and the second word was “Biden.”

That happened a few days after I stopped at a traffic signal in the heart of Duluth behind an SUV with a plethora of bumper stickers adhered to the rear door. One that stood out for me was a similar sentiment for Trump.

So we’re even. And those are pretty good examples of the rural-urban political split in our country these days, not to mention how crude and vulgar our politics have become.

Of course, here I couldn’t write out the naughty words on those signs. This is a family newspaper (as are all “regular” newspapers) and most operate the same way when vulgar terms are reported. They simply use the first letter followed by ellipsis or follow the first letter with “word” as in X-word.

I think we can all agree that our political discourse has grown increasingly crude in recent years. There was a time when politicians would refer to those challenging them as “my worthy opponent” even if privately they resented the H-word out of them. Or disputing political parties would refer to each other as “the loyal opposition” even if they really thought they were all full of S-word. (Refers to what the farmer hauled another load of.)

When I was a child, I was told swearing was a sin (along with dancing and card playing). Every time you uttered a swear word, Jesus wrote it down (not the word, heaven forfend, but that you used it) and if you had too many on his list, no going to heaven for you when your time came. So I felt guilty as a child when all of us neighborhood kids spouted rough language from time to time. But I was very young and concern about going to heaven or H…. was at a minimum. That, of course, is no longer the case.

The H-word is a funny one. Sometimes it’s a vulgarity and other times it’s OK. “Go to h….” is over the proper line just a bit. But “come hell or high water” is OK under most circumstances. “Heck,” of course, suffices everywhere as a substitute, as does “darn” for that other word (more on which later). But “come heck or high water” just doesn’t cut it even if you’ve been “to heck and back.”

I don’t think anyone — even the most devout — believes H.… or D.… are profane like F…. When I was a teenager, having advanced further into the world of cussing from time to time, there was also the issue of the “obscene” gesture. We all know what that means when we read about it in the family newspaper.

When it is absolutely necessary for a family newspaper to report that someone has raised a middle finger of one hand, the other digits enfolded in a fist, they call it an “obscene gesture.” But is it? Obscene?

I don’t think so. Vulgar maybe. My handy computer push-button dictionary says the word obscene refers to things that are “offensive or disgusting by accepted standards of morality and decency.”

So, does what is often referred to informally as “flipping a bird” meet that obscenity standard? I suppose it depends on one’s obscenity standards. I haven’t flipped one in years, although some drivers are handy with them if they catch you making a mistake in traffic that offends them. We all are offended by different things, I guess. I prefer to stick out my tongue in response. Be careful though; that could get you shot these days if road rage ensues.

That bumper sticker I described above reminded me of one I saw on a car’s bumper years ago that has become my all-time favorite. It simply stated, “WHERE AM I, AND WHY AM I IN THIS HANDBASKET?” Everybody knows that refers to H…. and I’ve been wondering the same thing myself lately with all the war, famine, pestilence, death and problems finding a decent host for “Jeopardy.”

I promised earlier I’d get back to the D-word. It’s become so benign now that I could probably spell it out in quoting someone in a family newspaper or referring to “damn the torpedoes,” a Civil War statement that has made it to our own time.

Back in the late 1930s, though, the D-word was not accepted in polite discourse and the makers of the movie “Gone With the Wind” had trouble getting hero Rhett Butler’s famous last line to Scarlett O’Hara, taken directly from the novel, onto the screen intact. The obscenity police hemmed and hawed and finally agreed, although the studio had to pay a fine.

So, as Rhett was departing and turned to the distraught Scarlett, he didn’t have to say in response to her question about her future, “Frankly, my dear, I don’t give a darn.” No, they had to let him say he didn’t give a “d….”

I’d spell it out, but this is a family newspaper.