By Jim Heffernan
The other day I heard our president, Donald J. Trump, refer once again to "hard-working Americans." He isn't the only politician to describe all Americans all the time as hard-working. They all do, both Democrats and Republicans. Even independents.

This is nothing new. The expression spills out of politicians' mouths in practically every speech, and always has. It's as though all Americans are hard-working, which, of course, cannot be assumed. I am not a hard-working American--I'm retired--and I have to admit, when I stop to think about it, I never was particularly hard-working. In fact, when I was young it was feared, and occasionally charged, that I might be "lazy."

But once I entered the work force, I'd work hard enough when it was expected of me, but if I could get out of hard work, I'd do it, even when I had "odd" (really odd) jobs. In my principal career I was a newspaper writer, which I never regarded as hard work. How hard can it be to write fake news?

Fake news was one of my favorite things to write. Not in the actual news columns of the paper, where fidelity to the truth and accuracy were stressed, but I wrote a lot of fake news in a personal column under my name, and had fun doing it.

Once I wrote a fake news column claiming that local archers allowed to hunt deer in the city were shooting their arrows into those plastic (fake) deer you see in some people's yards. Totally made up. Fake news. 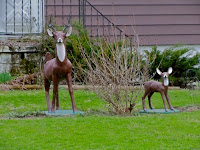 But the column got picked up on the Internet, went germ, if not viral, and some people around the country believed it was true. I got a call from a radio station in Illinois asking for an interview. The caller was crestfallen to learn it was fake news, although the term wasn't used back in pre-Trump hard-working America.

I'm old now, so I know very well what they mean by "off the hook," but how many Millennials can conjure up the image of an old crank telephone attached to a wall with the receiver holding down a hook? A sizable portion of hard-working Americans don't even know what a traditional receiver looks like, what with such widespread i-phone use. I go all the way back to the "number please" era of call-initiating.

OK, let's move on to the rolling up of the sleeves. Most of the politicians who are serving hard-working Americans, and whose telephones are ringing off the hook, "roll up their sleeves" every time they vow to actually do something. "We've got to roll up our sleeves and get to work" on this or that, they say.


Now I realize these are metaphors seasoned with a large dose of cliche, but harmless enough as figures of speech. Same for all of the "brave heroes" serving in the military, or veterans who have left it.

It cannot be assumed that everyone who signs up for a stint in the military is either brave or heroic. I was once in the U.S. Army, and I was not a brave hero, and, come to think of it, I don't think anybody I was serving with demonstrably was. Sen. John McCain is a brave hero, of course, everyone except President Trump agrees.

Yet to politicians all service members are brave and heroic, even if they sit in offices before keyboards, as I did in my military days, with an occasional foray into the mess hall for KP (kitchen police). There were times when that required a certain amount of bravery, I have to admit, depending on the dispositions of the mess sergeants.

There! I've been going to get this off my chest for a long time. Not that there was anything actually on top of my chest, mind you. It's just an expression, a harmless metaphor with a dose of cliche tossed in.