Where East Was East and West Was West, in Duluth...

What follows is one of several columns I wrote for the on-line magazine Zenith City Online, started and edited by Duluth publisher Tony Dierckins. ZCO is still active as an area history blog but no longer uses regular posts in a magazine format so Tony graciously allowed me to repost here on my blog. I was its "western neighborhoods correspondent" (also labeled "Denfeld Boy") on ZCO and wrote monthly about growing up in Duluth. Thus, virtually all of my monthly columns for Zenith City had some connection to Duluth's West End and West Duluth, back before they were called Lincoln Park and Spirit Valley. I've decided to put a few of them on my blog from time to time.             Jim Heffernan

Where East Was East and West was West
By Jim Heffernan


For decades atop the Point of Rocks, the commanding rock outcropping just west of downtown Duluth at the foot of Mesaba Avenue, a huge sign advertising Master Bread dominated the skyline. 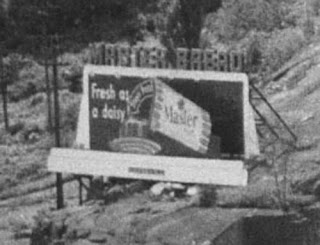 It was more than an ordinary billboard. It appeared to have been fashioned to fit the surroundings, long and narrow at the peak of the outcropping, and it was animated, showing a loaf of bread with slices pouring out of one end. Done with sequentially lighted neon tubes, it was attention grabbing and impressive for its day.
Its day, hard to pinpoint exactly, did encompass the years from my childhood in the 1940s until sometime in the 1970s. [editor’s note: Photo borrowed from Andrew Kreuger’s wonderful News-Tribune Attic.]

And it had greater significance than the bread wars between Master and Taystee, both baked in Duluth’s West End neighborhood (now referred to as Lincoln Park). The Master Bread sign came to symbolize the western end of “East End” (including downtown) and the beginning of “West End” including West Duluth. Only on the map did Lake Avenue divide Duluth’s east from its west. In Duluthians’ minds, the Point of Rocks, with its Master Bread sign, did.

The prevailing perception in Duluth was that the rich people lived in the East End, the working classes lived in the western precincts, and never the twain shall meet, except when their high school sports teams vied to prove, once and for all, which section of the city was best.


It was a fallacy, of course, to believe everyone in East End was rich. Far from it. But all of the mansions in town were there; the mining and lumber tycoons lived there, cheek by jowl with bankers and most doctors and the powers that were in Duluth. Never mind that the Central Hillside, a bit east of the Master Bread sign, was for decades considered Duluth’s poorest neighborhood.

In the 1970s, a colorful priest, Father F. X. Shea, was engaged as president of the College of St. Scholastica. In one of his many pronouncements about civic life, Shea called for the Master Bread sign to be torn down. He wasn’t expressing a preference for bread or disgust with advertising’s often intrusion on natural beauty; as a recent arrival here he had come to realize that the sign was a line of demarcation between east and west in Duluth that stifled the city’s social, business and cultural life. (The Master Bread billboard can be seen at the top of photo on right.)

I grew up on the “poor” side of the Master Bread sign that so brightly lit the Point of Rocks after the sun went down. Not that we were actually poor, nor were most of the others in the western neighborhoods. Far western Duluth had a steel plant, after all, together with other substantial industries, and the thousands of jobs they provided allowed workers—including immigrants and many who hadn’t completed high school—entry into what most people regarded as the middle class. Being middle class roughly meant owning a home, having a car and providing for your family.

My role here at Zenith City will be to write about the western Duluth neighborhoods as I recall them in the decades after World War II. My precise neighborhood was the West End, right in the heart of it, about half way between the Point of Rocks and the ore docks at 35th Avenue West. Informally, the ore docks have always represented the dividing line between West End and West Duluth.

There was competition between those two neighborhoods too, but socio-economically they were similar. Each had a thriving business district, providing residents with everything they might need from groceries to hardware to banking to household and personal needs, not to mention a stiff drink. J.C. Penney operated department stores in each neighborhood, as did Bridgeman’s ice cream parlors. The West End had more furniture stores; West Duluth more movie theaters (two) while each had two funeral homes for most of the years my memory encompasses.

Each neighborhood had numerous churches representing most of the mainline Christian faiths, but no synagogues. West Duluth had a small hospital, long-since dissolved, but people from the western precincts who needed hospital care depended, as did the entire city, on St. Mary’s (Catholic) and St. Luke’s (Protestant), both on the eastern edges of downtown.

Commandingly, West Duluth had Denfeld High School, for generations bringing together students from both neighborhoods whose earlier education had been provided at Lincoln Junior High (West End) and West Junior High. Until 1950, the West End educated its younger pupils at elementary schools scattered throughout the neighborhood—Adams, Monroe, Bryant, Ensign and Lincoln. West Duluth had Longfellow and Irving and others farther west, but short of Morgan Park and Gary New-Duluth, with their own schools, including a high school.

In future columns I’ll try to extract from these neighborhoods glimpses of their colorful past life —a life I knew as a youngster and much younger adult, when Master Bread meant more than the staff of life in this small corner of our world at the head of the largest freshwater lake in that world.