We had a late supper Saturday night at a fancy-dancy downtown Minneapolis restaurant following an evening of theater.

As a meat and potatoes kind of guy, I generally don’t like the dishes offered at fancy-dancy restaurants, not to mention the food. If I pick up the menu and it includes a preponderance of words I do not understand, much less would be comfortable pronouncing to a waitperson, I become somewhat uncomfortable.

I have learned over years and years of dining out that the more unpronounceable the menu item, the more it will cost you and the less you will get to not enjoy it on an oversize plate. That’s just the way it works in the world of fancy-dancy dining.

So on Saturday night, reviewing the wine list (hmmm no Thunderbird) and the menu, I knew right away that we were in for a shellacking, as President Obama might describe it. Of course, at this writing, I could never recall or, especially, spell some of the offerings, save for one, which I ordered: spaghetti. Yup, spaghetti. And meatballs, it said.

Not plain ol’ regular spaghetti, mind you, but some kind of spaghetti, to be sure.

“I’ll take the spaghetti,” I told the waitwoman in no uncertain terms, proud to be able to pronounce SOMETHING on the menu.

I think she knew what I was up to – pronunciation. In a very nice, helping, way, she said, “Did you know the meatballs are tuna? 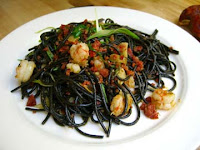 “And the spaghetti is black,” she informed.

Hmmm. Black spaghetti. A pasta of a different color. That’s a new one on me, but then I’m from Duluth. I probed further: “It’s black?”
“Well, kind of dark,” she said, “but it’s shaped like regular spaghetti.”

I did hesitate momentarily, but then went ahead with it. Black spaghetti and tuna meatballs. You have nothing to lose but your cynicism about menus that make no mention of things like “steak,” “baked potato” and other foods that my eye always seeks out when deciding what to order.

To make a long story even longer, I was able to tolerate the black spaghetti and tuna balls for the first few bites, but it was one of those entrees that features rapidly diminishing returns. Half way through the second tuna ball, for example, I realized that I didn’t like it as well as the first. And far be it from me to ask for sides of pineapple and mayo.

As far as black spaghetti (some would just say pasta noir these days) is concerned, it was tolerable. I finished much of my plate out of respect for the waitress (she’d warned me after all) and called it a late supper.

So it was not a great dining experience, further marred because I thought I was sitting near a booth containing none other than Michele Bachmann. Somehow I was aware that Republican Rep. Bachmann, who is running for president of the United States, was in Minneapolis that day speaking to right-wing bloggers, so I figured it was possible it was she sitting there with her possible husband and, across their table, another possible man and woman, making up a foursome.

All the while, as I waited for my black spaghetti and tuna balls to arrive, I couldn’t stop staring at this woman, becoming more and more convinced that it was Michele Bachmann. Still, her profile is so high now I couldn’t imagine that she is still able to just go into a fairly well populated restaurant and dine without people bothering her for autographs or attacking her verbally, depending on where they’re coming from politically.

Even when this woman and her party stood up and left, I couldn’t be sure it wasn’t her. I still am not entirely sure, but I’m starting to doubt it.

There is my report on how I spent my weekend. Black spaghetti with tuna meatballs and an encounter with Michele Bachmann or her twin or her clone. Well, not clone. Never clone. I’ve got to say the play we saw wasn’t so hot either. Plus, it rained quite a bit.
Posted by Jim Heffernan at 2:54 PM

What a wonderful weekend here in the Twins you had! I'd like to know which restaurant is was so that I'll NEVER go there.
Love your columns!

Pattymae: I'm a real meat and potatoes kind of guy and I did think I was being bold in my meal selection. We ate at one of the Guthrie complex restaurants and it was a great spot to catch an after-theater bite. But the folks sitting in the bar area had burgers and french fries on their plates. Guess we'll sit there next time :-) Thanks for reading and the fun comment!
Jim

Hi Jim
I happened to be in the cities this past weekend too, visiting with family.

Saturday evening my brother-in-law suggested going out to eat. My wife and I thought a steak dinner would be wonderful. We were thinking Mr. Steak he wasn't. I knew I was in trouble when Gloria the hostess met us at the door. Wearing a tiny black dress she had to stand at least 6'4" in her stiletto heels. We were seated and she lingered at the table I assumed in search of a gratuity. I short smile and shake of my head and she got the message it wasn't going to happen. My wife misreading my smile kicked me in the ankle.

Gustav, our server, appeared after a while. A smiling lumberjack type this Gus was not. Goose-toff, accent on the wrong syllable, probably was trendy in some circles with his prickly, short greased up hair of various colors. Orders were taken; mine started with an $18 salad the price of which didn't include tomato slices $3 and cucumber slices another $3. Dinner was garlic mashed potatoes for $12, asparagus I thought cheap at $7, and a steak which cost what would have bought a good used car in my youth.

The brother-in-law ordered up 3 bottles of wine. His family drinks, mine sips, I don't partake at all.

Dinners done, deserts consumed, wine gone; the brother-in-law turns to me and announces we will split the bill in half. His family, which controlled 2/3rds of the table, beamed at his gracious offer. I was opening my mouth in protest when I got another swift kick in the ankle from the misses. She squeezed my forearm to the point of numbness and I understood I was to play nice in the sandbox.

Goose-toff grabbed the offered plastic, returned with his tip already added in, and I signed my name to a piece of paper that reduced by bank account by several c-notes plus.

By the way the steak was excellent.

Eric: Oh, wow...I feel like a piker compared to your experience -- apparently on the same evening. We were at the Guthrie restaurant -- the one at ground level. Nice ambience, but not my kinda menu, as stated in my posting. I believe they have a shorter, more sensible, menu in the bar area. We all occasionally get caught up in the wrong place at the right time, restaurant wise, I guess. I end up feeling like a schnook after paying $20 bux for a dollop of black spaghetti and tuna meatballs. Can't help it. I also end up feeling gaggy. Always enjoy hearing from you. You write very well, by the way. -- Jim