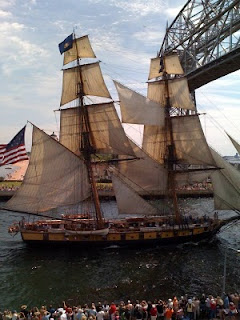 I saw Marlon Brando on the Duluth waterfront opening night of the great festival of tall ships. (The photo to your right is of one of those tall ships passing under Duluth's Aerial Bridge during the Grand Parade of Sail in Canal Park on 7-29-10. Someone my son knows took this amazing shot while perched on top of the Marine Museum.)
Of course the actor is dead and gone, but as I stood alongside the Bounty II, the sailing ship built for his 1962 film version of “Mutiny on the Bounty,” it didn’t take much imagination to envision Brando, as Fletcher Christian, and Trevor Howard, as Captain Bligh, glaring each other down on the deck of the imposing sailing vessel.

And we can likely thank Brando, should we ever make it to wherever his afterlife put him (one wonders), for the ship being here at all, or even existing. As I stood on the quay just a few feet from the Bounty II I found myself thinking about its journey from 1962’s filming in the South Seas to Duluth 48 years later.

So, if he wanted to remake “Mutiny on the Bounty” (it had been filmed in 1935 with Clark Gable and Charles Laughton in the leading roles) it would be done. And if to do so it required building a working replica of the 18th century ship Bounty, it would be done. It was done.

And as we see this weekend on the Duluth waterfront, the Bounty II is still sailing the seven seas, and now the greatest of the unsalted seas, Lake Superior, thanks to Marlon Brando and some of the king’s horses and men of almost 50 years ago.

To see The Grand Parade of Sail, catch this video on KQDS Radio Facebook page HERE. It's utterly amazing and majestic.


To check out the activities involved with the big Tall Ships in Duluth, click this Visit Duluth site HERE.
Posted by Jim Heffernan at 1:26 PM