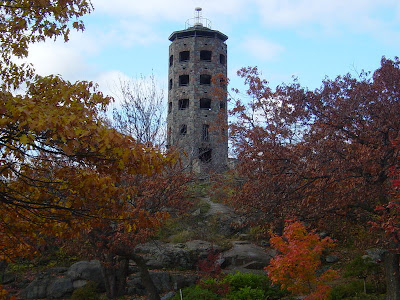 Today's Duluth News Tribune reports that a study is underway to determine the course of action for  the needed repairs on Enger Tower, Duluth's 70-year-old cherished landmark.  They hope to have a plan for the renovations by March. As you may remember, I was hiking around Enger Park and climbed the tower on what was the actual date of the 70th anniversary (June 15, 2009) of it's dedication by Crown Prince Olav V and Princess Martha of Norway. You can read my account of that day as it appeared on this blog and a bit more about the tower's history HERE.  Earlier reports of the upcoming renovations to our popular landmark indicate that preservation groups and others will work together. Enger Tower could be closed for a lengthy period of time. One earlier report indicated that it could be closed for up to a year. Today's story indicates that work requiring closure of the tower would begin in the fall. Stay tuned...
Posted by Jim Heffernan at 11:30 AM