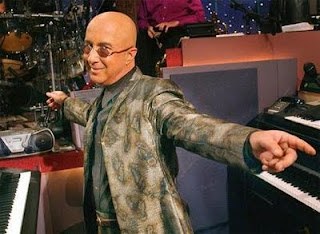 Paul Shaffer, the bullet-headed music director on David Letterman’s show, has come a long way from his hometown in the Canadian Lakehead, Thunder Bay, just a short jaunt up the North Shore of Lake Superior from Duluth.

Shaffer has written a memoir, “We’ll Be Here For the Rest of Our Lives,” that has just come out and the other night he was Letterman’s main guest on the couch to talk about the book.

He told a story from the book that offers great insight into fleeting fame as well as the mind-set of pop diva Britney Spears. Shaffer said one time Spears was scheduled to be a “surprise” unbilled guest on Letterman – one of those guests who just walks onto the set unannounced, causing great surprise to the audience.

Talking with Spears about the upcoming appearance before the show’s taping, Shaffer said he suggested to her that since she was just going to walk on – barge in – like Bob Hope used to do on Johnny Carson’s “Tonight Show,” Shaffer thought he’d have the band play Hope’s old theme song, “Thanks for the Memories.”

Asked Spears: “Who’s Bob Hope?” After which, said Shaffer describing the scene, she suddenly realized who she was talking to. “Oh, you’re David’s D.J.”

Not a good night for Bob Hope or Shaffer himself. But a worse night for Britney.

Shaffer fared better in the New York Times Book Review on Oct. 4. The review of his memoir was generally favorable, and said the book describes his parents as “an outwardly conventional middle-class Canadian couple who strove to live their lives ‘as they imagined Sinatra lived his’”…

Most Duluthians have visited Thunder Bay at one time or another. While it’s a nice place, it’s hard to imagine duplicating Frank Sinatra’s lifestyle there. Of course, Bob Hope and Sinatra are now sleeping giants.