All about Christmas Eve... 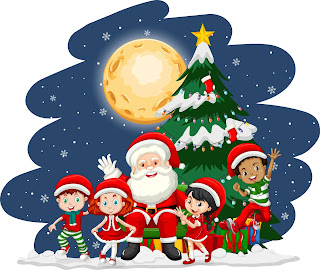 Written by Jim Heffernan for the Duluth News Tribune/Saturday, 12-24-22

Well, it’s arrived — Christmas Eve. “Finally,” go the excited children; “already?” think the harried adults making preparations. But here it is, and there’s no turning back, except in golden memories of Christmases past.

As a child, Christmas Eve was always the most anticipated part of the holiday for me. That’s when Santa Claus came. In the flesh, right to our porch door, ho-ho-ho-ing as he emptied his pack full of gifts through the open door, greeted by one of the adults in the two-family gathering.

Out on the lawn, from where a clatter arose, you could hear the tinkling of sleigh bells (real ones) as we imagined eight tiny reindeer prancing and pawing each little hoof waiting for Santa to hop back into the sleigh, give them a whistle, and off they’d go like the down of a thistle. They’d be heading for other communities like Hibbing, Chisholm, Eveleth and, yes, Virginia, there is a Santa Claus heading your way.

Exciting time for the children in our family. We weren’t bothered by the lack of fireplaces in our homes. We knew he’d come right up on the porch with our gifts as we excitedly reacted, adults restraining us from running to the door to actually see him. Good thing. Had we escaped we’d have seen a couple of adult men of the family carrying out the magic in shirtsleeves.

We were — and are — big Santa Claus people. Due to the theatrics described above, I was a firm believer in Santa Claus far longer than most of my friends. Eventually, it became apparent to my parents, so my father sat me down for a serious talk. I was concerned he was going to tell me about the birds and the bees. I knew all about them. No, the message was that maybe it was time to realize the truth about Santa.

Hold it. Did that happen or did I dream it?

So the magic was over for me and the other kids in the extended family as we moved into our teens. A couple of us were the youngest — no younger siblings waiting in the wings for whom to enact our Christmas Eve drama.

Sad, but it didn’t last long. In the twinkle of an eye, suddenly an older relative, who had married, showed up on Christmas Eve with a baby, soon a toddler, soon joined by more of that next generation.

Off we went again on our Christmas Eve theatrics, more wide-eyed children restrained by parents as the Jolly Old Elf showed up on our porches. Out came the sleigh bells, older relatives disappearing briefly to assist Santa.

And so it continues, but there are complications. My generation married and started families, and then the next generation — our kids — did the same. Family Christmas obligations inevitably become divided, with each young family heading off in different directions for part of the holiday.

In the case of my immediate family, our traditional gathering was moved from Christmas Eve to Christmas Day. How’s that going to play for the young grandchildren and our Santa theatrics?

Never fear. Perhaps you didn’t realize that after Santa makes his rounds on Christmas Eve in the northern hemisphere, he must also see to the children of South America. Yup, he heads down over the equator and brings gifts to excited children down there. This takes time, of course, and by the time he’s finished in Chile and Argentina, Christmas Day is already dawning when he heads back up to the North Pole, his rounds complete. Almost.

On his way back up north, he shows up at our Christmas Day family gathering after the evening meal, pounding on the porch door, opened by one of us adults, another having disappeared into the cold, and pouring gifts into our arms, the little ones restrained by moms and others.

I was concerned that this scenario might even be coming to an end as the kids two generations down from me began to age out of being true believers. But, guess what? Our extended family celebration this year is welcoming a new set of little ones, prime for our Christmas theatrics.

And so it goes. Christmas and children go together like a sleigh and reindeer. As Charles Dickens put it: “… it is good to be children sometimes, never better than at Christmas, when its mighty Founder was a child himself.”