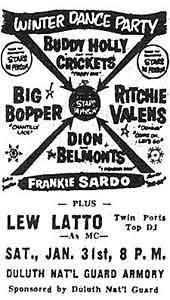 Today is the anniversary of the Winter Dance Party Tour in Duluth on January 31, 1959,  three days before "The Day the Music Died." I've written my account of attending that historical event (along with famed Bob Zimmerman, now known as Bob Dylan) many times, most recently here on this blog. Buddy Holly and tour musicians died in a plane crash shortly after they performed in Duluth, sadly and abruptly ending the tour.

Click HERE to connect to my most recent blog post about this concert.  Kevin Pates, retired DNT sportswriter and preserver of pop history, ran a wonderful and comprehensive story in the DNT for a past anniversary of that concert. You may find related photos and his story HERE in the Attic of the Duluth News Tribune.

The Duluth National Guard Armory where this event took place is under renovation with hopes to resurrect to it's former days of glory. The Winter Dance Party Tour in Duluth on January 31, 1959 was promoted by and emceed by my old friend, Lew Latto. Latto, now deceased, was a youthful entrepreneur and radio personality while in college.

Posted by Jim Heffernan at 2:46 PM