For whom the holiday bells toll... 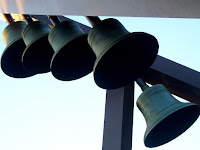 Written by Jim Heffernan for the Duluth News Tribune on December 12, 2020

Well, this is certainly going to be a different Christmas — like no other that I can recall, and I’ve lived through plenty of them.

My parents were around for the Spanish Flu pandemic of 1918 but they didn’t talk about what effect it had on Christmas that year, other than to say that Duluth churches were closed that fall and masks were worn. And now here we are, masks affixed, 100-plus years later anticipating a holiday season with another global pandemic lurking about everywhere.

Tough times. Terrible times. Worrisome times. Very different from so many joyous holidays in the past when, as the poem goes:

I heard the bells on Christmas Day, their old familiar carols play, and wild and sweet, the words repeat of peace on earth, good will to men.

Yeah, peace on earth. Pretty hard to come by in my lifetime, but even during the dark days of World War II my earliest Christmases were joyous with gifts galore, special food, decorations everywhere and church programs. As I have often complained, in those Sunday school manger tableaux I was always a shepherd, never Joseph. Story of my life.

I thought how, as the day had come, the belfries of all Christendom, had rolled along the unbroken song, of peace on earth, good will to men.

Segue to 2020. In addition to our COVID19 concerns this year, there has been so much upheaval caused by our national election — still going on weeks later — not to mention the lack of peace in the Middle East and elsewhere, even violence in the streets of America. I’ve never seen the holiday season so grim.

We’ll be sending out our Christmas cards as usual, but we’re one couple who won’t be gathering with family on Christmas Eve as we’ve always done — always in my lifetime, our now-grown kids’ lifetimes and their kids’ lifetimes. It’s going to be very different, very quiet. Lonely.

A certain Jolly Old Elf won’t be swinging by our home this year, so much to the delight of the youngest ones on Christmases past. Our fireplace doesn’t have a regular chimney so the tradition in recent years has been for the white-bearded Saint Nick to pound on the door and throw bundles of gifts in, helped on the inside by an understanding adult, but unseen by kids. Jingle bells, real harness bells, can be heard tinkling in the background as reindeer prepare to resume their flight.

Not going to happen this year. Quarantine.

Still, we’re grateful no one close has gotten sick so far and hoping against hope that that remains the case. And even as I write this early in December, there’s hopeful news of the development of vaccines that have the potential to turn this pandemic around eventually.

Then pealed the bells more loud and deep, God is not dead, and doth not sleep; the wrong shall fail, the right prevail, with peace on earth, good will to men.

So there’s hope as we move through this very bleak holiday season, even as we approach the shortest, darkest days on the calendar, and, in 2020, in most of our lives.

Till ringing, singing on its way, the world revolved from night to day, a voice, a chime, a chant sublime, of peace on earth, good will to men.

I’d like to thank Henry Wadsworth Longfellow for help in writing this final column before the actual holiday. His words are in italics. And while I’m at it, let me wish everyone as merry a Christmas/Happy Holidays as possible.