Voting just isn't what it once was... 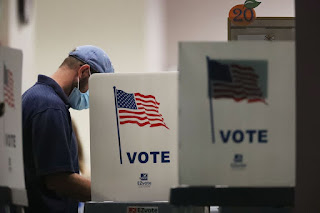 Written by Jim Heffernan for the Duluth News Tribune on November 14, 2020

Well, the election is all over but the shouting (for joy) or the pouting (out of disappointment), but it’s over in either case. What a relief.

These columns are written a few days before they are published, so a lot of things might still up in the air, but it looks like Biden’s the one. Fine with me, maybe not fine with you. But this is America, don’t forget. Majority rules in a Democracy.

For the first time in my voting life, I voted by mail this year. COVID19 precautions, of course. It’s the first time in a startlingly long time that I didn’t go to a polling place to cast my ballot. Here’s a hint about how long: I voted for John F. Kennedy in 1960. Do the numbers.

Thinking so much this year about this wildly contested election, I found myself recalling how the process of actually casting a ballot has changed here in Duluth. Today, if you don’t mail it in, you go to the polling place, sign your name, they hand you a paper ballot and steer you to a little desk with a black pen and you mark your choices with little black dots.

The ranks of those of us who remember how the actual act of voting took place in the long past are thinning, but it was different, and perhaps someone should record it for the sake of history.  So here goes. 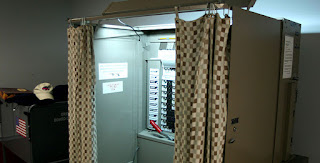 In Duluth (rural areas still used ballot boxes), the city provided what were called voting machines. They were stored in a warehouse in West Duluth and hauled out each election and placed in precincts across town. Some precincts that drew lots of voters would get two or more machines.

The gray machines were shaped like a refrigerator but somewhat taller. When open, the cloth curtains, about three feet long from top to bottom, were apart to allow the voter to enter. Upon entering, the voter would grasp a lever and pull the curtain shut.

Inside, with her back to the curtain, a voter would be faced with a dashboard, about chest high, with little levers to pull down beneath the names of each candidate. Click, click, click, you’d go, and your vote would be registered somewhere inside this large machine, There was a small slot with a paper scroll inside for write-ins of Mickey Mouse, Donald Duck or some other candidate who would never win — but in some cases should have. When you were done, you would turn, grasp the lever and part the curtain again.

The act of parting the curtain triggered the little levers you had pulled town to cast your ballot, clicking them back up for the next person to register their votes on the dashboard. When exiting the machine by parting the curtain, it always surprised me that voters waiting their turn did not applaud, like a theater curtain call, but it never happened.

After the polls closed, election judges at each precinct would check the numbers recorded inside the machines and tabulate the vote, finally determining the totals for each candidate or issue on the ballot. The results would be called in to headquarters (usually the county auditor or, in city elections, the city clerk). And that was it.

The next day, when the election had ended, workers would visit each precinct, load the machine or machines on a truck and haul them back to the West Duluth warehouse, their important tabulations still inside. I need hardly point out this was a monumental furniture-moving job, with each machine weighing — this is a guess — perhaps several hundred pounds.

That was not it. The election night tabulations were not the official count. The votes had to be canvassed. A few days later, various officials, named to a canvassing board, would visit the West Duluth warehouse and check the numbers on each machine. When that was completed, the official count was declared.

That was it. A huge logistical and complex operation.

But you know what? As a voter you really felt that you had participated in something big, something important, and you had.

I never feel like that today, especially this election when I marked up a mail-in ballot and dropped it off at an official spot, like mailing a letter. Nowadays, even showing up at a polling place on election day and voting by marking dots with a pen on the ballot and feeding it into the slot of an anemic-looking little receiver just doesn’t have the gravitas that voting used to instill. At least in me.

Of course, I’m a geezer, so the old ways almost always seem like the best ways. But some things never change, and it’s consoling to see that Mickey Mouse and Donald Duck are still showing up in elections regardless of drastic changes in the process. Sometimes they’re the best choice.