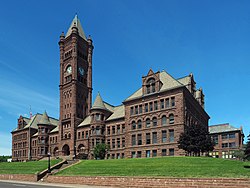 Written by By Jim Heffernan for the Duluth News Tribune, October 17, 2020

So, the Duluth School Board is going about selling Historic Old Central High School. Whew. I have pretty strong feelings about that.

Some history of my own: I’m an old (I’ll say) Denfeld boy. In my childhood, growing up in the West End (now Lincoln Park), I wanted two things in life: To go to Denfeld and to go to heaven. So far I have achieved just one of them and lately I’ve been wondering about the other.

I went to Denfeld in the mid-1950s when the rivalry between Denfeld and Central was at its height. We hated Central. We despised Central. We loathed Central. I’m running out of verbs.

It’s safe to say that the kids at Central felt the same way about Denfeld.

At an early age I learned a saying that sticks with me today. It’s like a sports cheer: “One, two, three, four, five, six, seven, all good people go to heaven, when they get there they will yell: Central, Central, go to….” Well, you know. This is a family newspaper. Hades doesn’t rhyme with yell. 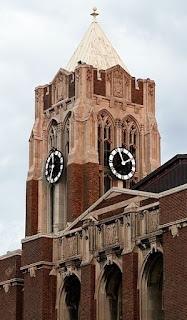 The extreme rivalry between Denfeld and Central achieved a fever pitch each autumn with the annual Denfeld-Central football game at Public Schools Stadium, out there in West Duluth right next to Denfeld. In fact, while it was supposed to be for all public schools, we Denfeldites claimed it as our own.

When the Central football team and fans showed up for the annual game, we felt they were invading our territory.

For reasons I can’t fathom today, the powers that were in Duluth Public Schools would schedule the Denfeld-Central game as close to Halloween as possible to assure mutual destruction and the spirit of mischief among students at each school. Paint would be used at times to deface each other’s buildings. Cops were on alert.

Lunchtime raids by marauding students from both schools on each campus in crepe paper-decorated cars in each school’s colors — Denfeld was maroon and gold; Central red and white — on the day of the big game drew disgusting jeers and taunts by students on the raided campus. Middle fingers raised and aimed in both directions were common.

In the morning, the schools held “pep” assemblies in their auditoriums to put everyone in the frenzied mood. Halls in the schools were decorated in school colors and posters encouraging victory in the game were plastered everywhere. Little or no learning took place. This was war.

It was all very exciting. Fun, actually. High school in Duluth in a time long past. What about East? East didn’t count. Just a bunch of cake eaters whose school had only been founded as a high school in the early ‘50s. Not enough time for traditions, rivalries and blind hatred to develop. (Don’t get angry, East. Fine school; educated my kids.) Morgan Park and Cathedral were just too small. Besides, they didn’t have clock towers.

Denfeld and Central were the big show. Hunters vs. Trojans. John Vucinovich, Central’s coach, vs. Walt Hunting, Denfeld’s. Both were legendary.

In those days, Public Schools Stadium had stands facing each other with the football field separating them. Good thing. The animosity could have led to serious confrontations if the opposing loyalists were mixed. If memory serves (and so often it doesn’t) the two schools alternated sides of the field each year.

Down in front girl cheerleaders clad in their school colors would lead the crowd into a frenzy. “Hurrah for the red and white,” the cheerleaders for Central would sing. On the Denfeld side, “One, two, three, four…” Well maybe not that but “Roll on to victory..,” and “When the Denfeld Hunters fall in line they’re gonna win this game another time” led by the maroon and gold-clad Denfeld cheerleaders.

The uniformed marching bands of both schools would accompany all this, seated in front rows above the 50 yard line across the field from each other.

Regardless of who won the game, when it ended large numbers kids from each school would descend on Superior Street in downtown Duluth, cars still decorated with crepe paper, horns honking, jeers exchanged, impromptu drag races at corners when the traffic signals changed to green. Pandemonium reigned. Talk about American graffiti. Talk about fun.

So why would I, a superannuated Denfeld chauvinist, so regret the possible impending sale of Historic Old Central, which was converted into the district’s administration headquarters and hasn’t actually served as a school since 1971? I have come to love that building, and for what it has represented for nearly 130 years. Like the Aerial Lift Bridge, old Central, with its imposing clock tower and stone facade, is a symbol of Duluth. I am concerned a private owner wouldn’t take proper care of it.

Several years ago, a few of us from this newspaper took a tour of the building, which included a climb into the tower, looking at those four clocks from the inside and the intricate mechanism of their operation. It is a vantage point that offers breathtaking views of Duluth in all directions.

With my history as a Denfeld grad, loyal to my high school for all these years, I stood in the Central tower and scanned the hundreds of autographs scrawled on every flat surface, put there by students who loved their school for nearly 80 years.

Glancing furtively around, I added mine. And proud to have it there.