Back to hockey after years of hooky...

I’ve been drawn back into the world of ice hockey after a hiatus of 25 years or so. I have three young grandsons now playing the game at the early-stage levels, starting with “squirt” and moving on up the line.

It means I have been attending a few kid hockey games again, bringing back memories of when I went to a lot of kid hockey games when my son, the father of these three up-and-coming Gretzkys, was playing at these same levels.

I’m pleased to say I’m better schooled in the fundamentals of the game now than I was when my education in hockey began as the father of young player. Before that, while I went to a lot of hockey games for social reasons when I was in college, I never paid much attention to the rules of the game, choosing instead to pretend to be interested while scanning the crowd or seriously discussing our frivolous plans after the game.

I wrote a column on my youth hockey experiences, my magnum opus on hockey, in the Duluth News Tribune in 1989 that got picked up in the book of my various columns, Cooler Near the Lake, that was published in 2008. I repeat that column here today. In a fit of shameless self-promotion, I’ll point out that the book, while not as ubiquitous in book stores any more, is still available locally at a couple of local shops, The Bookstore at Fitgers, Duluth Barnes and Noble store and online at: Zenith City Press, Barnes and Noble and Amazon.

You'll find the column below, unabridged, and in my book. And again, stay tuned as I intend to write pretty regularly here once again.
---Jim

Heaven knows I try to keep up with what’s going on when I watch hockey, but it’s a fast game, and most of the time I don’t know why the referee or linesman or other guy in striped shirt blows the whistle, so I ask somebody and when they tell me I feel stupid.

I didn’t grow up playing or watching hockey and never paid that much attention to the rules of the game, so with hockey it’s like I’m from China or Mars or somewhere. I don’t know things other men seem to know about the game and when I ask and they have to tell me I feel stupid.

Oh, it’s pretty easy to follow hockey in a surface way–bunch of skaters in dark jerseys try to maneuver the puck past a bunch of skaters in light jerseys and put it in a mesh net protected by a “goaltender.” But a lot can happen along the way, and when they blow the whistle to stop the action I don’t know why so I have to ask somebody and when they tell me I feel stupid.

Or if they don’t stop the game, but the other people in the crowd begin to holler at the ref that he missed something I missed but I don’t know what he missed, I feel stupid.

It’s easy for guys who have been patrons of the game of hockey all their lives to recognize infractions of the rules, but how’s somebody like me who doesn’t know cross checking from butt ending supposed to know when they’re doing it? Then, if I ask somebody, I feel stupid.

I’m getting better. I used to wonder about things like “off side” and “icing” and when I’d ask someone what happened (“Why’d they blow the whistle?”), they’d explain what an off side is or what icing is and when I didn’t really catch on they’d think I’m stupid. 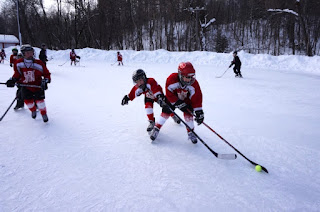 But I’ve got those down good now–so good that, when I see the puck go all the way from one end of the ice to the other and the official blows his whistle, I mutter “icing” to the person next to me who gives me a look that has “so what else is new?” written all over it, and I feel stupid.

Same thing with “off sides.” After years of inquiring, I finally learned that they’re off side when the skater crosses the “blue” line ahead of the puck, so I’m pretty quick to show off my knowledge by hollering “off side” when it happens, but nobody else does because it’s so obvious and then I feel stupid.

After years of watching hockey games, I still have trouble figuring out which penalties are which. The referee has certain hand signals that other people recognize as signals for such offenses as high sticking, hooking or slashing, but I don’t know which signal is which, and when I have to ask somebody what the penalty was, I feel stupid.

I don’t think I’ll ever really understand what they mean by “forechecking” but sometimes when I watch the game on TV and they interview a sweaty, breathless player at the end and ask him, “What was it that turned the game around for you guys?” and the player says, “We forechecked well,” I always wonder how I could have watched a whole game and not noticed, and right there in my living room I feel stupid.

Hockey announcers are always making me feel stupid. When they describe the action on audio they see things I’m not seeing on video, like where the puck is going on the ice–places like “the slot” and “the point,” which are not marked on the ice, although “the crease” is, and they’re not talking about pressed breezers, which I thought for a long time, and when I found out the hard way–by asking–what it really was, I felt stupid.

There are certain things I understand about hockey, but then everybody understands them because how could you miss them? Like “charging.” Your kid (your kid is why you see all this hockey in the first place) goes on the road for a weekend series and you have to stay in a hotel for two nights and you pull out your Master Card and put the weekend on it, that’s charging, and when I do it I feel stupid.

Sometimes as I watch the frustration the hockey players experience in chasing that little black puck around a slippery surface while being knocked around by other people just for trying to achieve a goal, I think of hockey as a metaphor for life, because the same things happen to you when you try to accomplish anything–there’s always somebody in your way to knock you off balance and stop you from reaching your goal–­and when my mind wanders down those philosophical pathways I miss something on the ice like “hooking” or “slashing” and I ask somebody what happened and when they tell me I feel stupid.

Originally appeared in the Duluth News Tribune on Sunday, Feb. 26, 1989

Posted by Jim Heffernan at 4:27 PM