A call from Dear Abby... 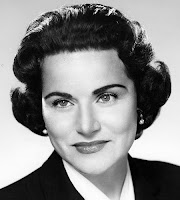 "Dear Abby: My wife sleeps in the raw. Then she showers, brushes her teeth and fixes our breakfast — still in the buff. We’re newlyweds and there are just the two of us, so I suppose there’s really nothing wrong with it. What do you think? — Ed
Dear Ed: It’s O.K. with me. But tell her to put on an apron when she’s frying bacon."
(As quoted in a past Dear Abby column in today's NY Times story by Margalit Fox: Pauline Phillips, Flinty Adviser to Millions as Dear Abby, Dies at 94. Read the full story HERE.)

I learned today that the creator of the famous Dear Abby column, Pauline Phillips, has died. She was a spunky lady who had a way with listening and giving advice. Her death was duly marked on the front page of the NY TImes, demonstrating the indelible mark she made on our society.

A few years ago, as I was rummaging around some old Duluth News Tribune columns I wrote and came across something that connected me directly to Ms. Phillips. In her research on limericks, Abby (Pauline Phillips) came across one of my columns about the limerick "An Old Maid from Duluth" and wanted to refer to it in her advice column. What does a spunky lady like Ms Phillips do when she wants something?  She calls the house after usual work hours and asks to talk to me. I, however, was still at work and she got my wife, introducing herself as "Dear Abby." My wife took the call and almost fainted, thinking this could be possibly be a hoax. Why would this famous person be calling the Heffernan home? Her voice was quite distinctive and well-known as she had–in later years–made many appearances on TV and radio as well as in print through her popular syndicated newspaper columns. My wife figured it could actually be her and gave her my work number. She introduced herself to me the same way, "Hi this is Dear Abby!" I, of course, gave permission for her to use my column with the reference to the limerick, "An Old Maid from Duluth" and she later sent me a nice note thanking me. I consider it a brush with a true American icon.


Abby, of course, is the name of the syndicated advice columnist appearing in newspapers all over the country, including the Duluth News Tribune where it still runs. Some of you are old enough to remember the originator of that column–the mother of the current Abby, Pauline Phillips. The senior Phillips penned the name Abigail Van Buren and began writing her very successful column in 1956. After she retired, her daughter, Jeanne, took over–and the rest is history.

You can read that old Dear Abby newspaper column printed in newspapers across the nation about Ruth from Duluth by clicking HERE where you'll also see my claim to fame in the advice world. The current Dear Abby maintains a web site and continues writing her advice column in newspapers everywhere.

Posted by Jim Heffernan at 2:53 PM