Here’s some good news you won’t find in the mainstream media – just in time for the holidays. 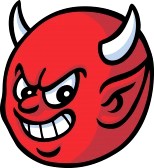 DATELINE HELL -- Officials here announced today that the devil has gone missing. “Our ruler disappeared from his golden throne the day after Thanksgiving and hasn’t been heard from since,” a Hades spokesman stated in a terse message. He denied the disappearance had anything to do with Black Friday, a perennial favorite of the prince of darkness.

Christians and others around the planet, together with multitudes already in heaven, were jubilant, although U.S. church authorities urged caution before jumping to the conclusion that the devil is dead. “Without the devil, of course, there would be no need for the churches,” said a retired Episcopal bishop who asked not to be identified by name for fear of being struck down.

Nevertheless, Pope Benedict XVI said Catholics should celebrate the news in Christmas masses, and veteran protestant evangelist Billy Graham issued a statement from his hospital bed expressing hope that reports of the devil’s demise are true. “If they are, I’ve finally won,” Graham exuded.

President Obama spoke briefly from the Rose Garden, saying, “First we got Osama bin Ladin and now I am pleased to learn that Satan might also be eliminated.” Obama faces a tough election next year.

The surprising news had the effect of shaking leading Republican candidates for president, catching them off guard. Former Massachusetts Gov. Mitt Romney, a devout member of the Church of Jesus Christ of Latter Day Saints, said he wouldn’t be surprised to learn the devil had taken up residence in the White House, “where he has often been a guest.”

Former House speaker Newt Gingrich, who has been rising in the polls, said on Fox News, “Beelzebub is a wily character who throughout history has been known to show up at various times and various places outside of his home base. I know him well, and he’ll be back.”

In a statement from the Netherworld, where he has resided since his death in 1972, former FBI Director J. Edgar Hoover said his agents know exactly where he is. “The devil is in the details,” said the disgraced ex-top cop.