When wolves almost got the deerslayer... 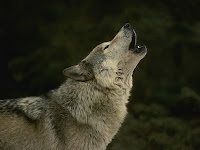 Firearms deer hunting season is over in Minnesota, but the Wisconsin nimrods are still going at it.  I do not hunt, but my father did – deer only. Never partridge or ducks in the years our lives overlapped.

The old dad, George, died 40 years ago this month, and with deer season and that anniversary plying my mind, I recalled the time he and his three hunting buddies (they were known to their wives as the Four Horsemen) went beyond their normal range well into the
wilds of extreme northern Minnesota to Mizpah, up there by Northome, in Koochiching County. We all know that terrain, right?

They stayed in a hunting camp with a bunch of other deerslayers, and, unlike today when most hunters climb aloft into camo-draped stands and wait for deer to wander by, my father’s generation of hunters did the wandering around in the woods and frozen swamps hoping to encounter unlucky deer.

I must have been about 10 years old, putting this hunting expedition in about 1950. Could have been ’49 or ’48. In any event, when George returned, he had quite a tale to tell, one I believe to this day because he was not a fibber or enhancer. He truly believed he had stared down a pack of wolves in a clearing somewhere near Mizpah as he hunted alone.

Here’s how he described it. He had set his rifle – his trusty pump-action Remington 30 – against a sapling in the middle of the clearing to light a smoke when all of a sudden an unseen wolf howled from the nearby denser ticket. Then another howled a short distance from the first. Then another, and another.

George believed he might be their next meal. So he forgot about the smoke and slowly reached down, picked up his rifle and stood his ground. He believed if he showed fear or tried to run he would have been attacked.

So he just stood there, rifle at the ready, and eventually – I suppose it was just a few minutes – the sounds disappeared. He said he never saw a wolf, only heard them.

Back at camp that evening, he was told by locals that wolves had attacked a hunter once and all they found were his boots, with his feet inside.

Can this story be true? George was not given to hyperbole that I know of. Certainly not with the family. But I have come to learn that cases of wolves attacking humans are virtually nonexistent. And if there were wolves surrounding him, they didn’t attack. He believed it was because he didn’t panic.

I only remember him bringing home one deer in the years he hunted. The gutted doe was hauled into the basement of our house to await the grisly ministrations of the Four Horsemen, which involved skinning the animal a short time later in a shop of one of his companions as we children watched. I found the process fascinating at the time, but nothing I would care to partake of as an adult.

George continued to hunt well into his elderly years, seeking other companions after the other three “Horsemen” died. Then he joined them 40 years ago, leaving two sons who never took up hunting, maybe because he never took us with him when we were young.

Come each deer season, I never feel the urge to join the thousands who take to the woods in search of venison. I just can’t bring myself to kill a brown-eyed mammal.

Moral: If you’re going to hunt around Mizpah, be sure your toenails are neatly trimmed. Just in case.
Posted by Jim Heffernan at 3:20 PM