There's brillig in the slithy toves of Iceland... 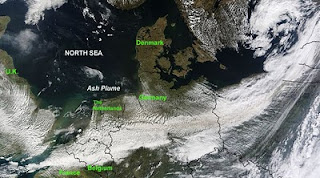 The photo (above) is from NASA's satellite.
I have always had a strong affinity for Iceland, but I don’t know why. I’ve never been there, although I think I flew over it once on a trip to Europe. Maybe in another life I spent time there – who knows?

Now Iceland is in the news as the source of that terrible volcanic ash that has grounded airplanes in a wide swath across Europe. And not that long ago, Iceland faced bankruptcy and had to be bailed out by other countries, but not Greece.

So two bad things about Iceland in recent months. I grieve for Iceland and believe the small island nation needs some shoring up.

That is the kind of landmark name that makes me glad I went into print journalism, and not broadcast, but it is vexing as well because who can spell Eyjafjallajokull, let alone Reykjavik, Iceland’s capital? Down the road a piece from Reykjavik are some of Iceland’s other towns such as Kopavogur, Hafnafjorour, Akureyri, Reykjanesbaer and Garoabaer, where, it is said, there is considerable brillig in the slivy toves.

This does not bother Iceland’s foreign minister, Ossur Skarphedinsson, nor concern Baldvin Hannibalsson, former ambassador to Washingon, whose names, along with all those places, challenge the touch system of typing which has stood me in such good stead all these years.

And since brillig in the slivy toves has reared up in rural Iceland, it’s only a matter of time before the mome raths outgrabe once again, after, of course, the gyre and gimble in the wabe settles down, making the borogoves all mimsy.

But I go on. Iceland has had some tough sledding but I’m sure it will come galumphing back with frumious alacrity, and burble as it comes.

Note: The places and names above are real; the nonsensical words are from Lewis Carroll’s poem “Jabberwocky.”
Posted by Jim Heffernan at 2:59 PM

Thank you for brightening my day with this article!

Thank you, Kath, for brightening my day! I had fun with that writing too. Glad you enjoyed it.
Jim