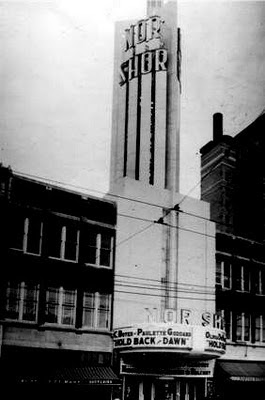 The NorShor Theatre picture (above) is one of the pictures given to me in the 70's by George Brown, then manager of the theatre. This picture and others in my collection have been widely circulated. Note the marquis for the first movie shown in the theatre after the remodeling of the Orpheum (original entry and facade on the avenue) was transformed into the NorShor: Hold Back the Dawn with Charles Boyer and Paulette Goddard.

Paul Lundgren contributed a short history of Duluth's NorShor Theatre in the Perfect Duluth Day blog. The Orpheum building (former Orpheum Theatre) that houses the NorShor turns 100 this year and that inspired Paul to write about it. Check out the PDD site HERE for more from Paul about that history.

Tony Dierckins, local publisher and historian, commented on PDD about the vintage pictures of the NorShor I shared with him and also with Laura Ness who compiled a NorShor history piece for the Zeppa Foundation a few years ago. Tony hopes to publish some of those pictures on his web site soon so stay tuned at his site, http://www.x-communication.org, to see those pictures.

Here are my comments on PDD reflecting more on the old NorShor...
Yes, Tony D. has my cache of interior and exterior pictures taken at the time of the grand reopening when the Orpheum became the NorShor; also interior and exterior shots of the Orpheum before it was remodeled. The photos were given to me by the late George Brown, long-time NorShor manager at the time of his retirement in the 1970s. A couple of the shots are of the premiere at the Norshor in the late 1940s of a movie set in old Duluth called “Woman of the North Country.” Filmed in Hollywood with matte-drawing backdrops of old wooden ore docks, It starred Rod Cameron and Ruth Hussey, and the photo shows Cameron alighting from the airplane in Duluth, not Charles Boyer or either Paulette Goddard or Olivia DeHavilland. They didn’t come to Duluth for the opening of the Norshor, but Boyer and Goddard were stars of the first movie shown in the newly remodeled theater, “Hold Back the Dawn.” Tony D. might want to correct that. One star of the Boyer, Goddard, DeHavilland magnitude did appear in person at the Norshor: Ingrid Bergman. She came here to sell war bonds during WW II and gave a sales pitch from the NorShor stage before motoring to the Riverside shipyards to speak to workers. As Paul Lundgren points out, it’s all in those old Duluth News Tribunes on microfilm at the library. Also Duluth Herald. Remember that?”

Here's an anecdote going back to the building's Orpheum days (1911-1940): I once came across a Duluth newspaper review of a popular stage play of the early 1930s, "The Barretts of Wimpole Street," playing at the Orpheum, that listed Orson Welles among cast members in the role of a juvenile. Welles was born in 1915 (thank you Google), so he must have been 16 or 17 when he toured with the play, including its stop in Duluth.

Note: In my book, Cooler Near the Lake, I include a column about the NorShor–a memory piece about what it was like to see a movie at that theatre in its heyday.
Posted by Jim Heffernan at 1:46 PM

I remember walking along the gallery on my way out of the Norshore Theater. They were awesome.

It's a grand old theater! Let's hope that the City of Duluth will be able to keep the vintage theater going with the recent purchase. Lots of money needed though and lots of upgrades before they can move on. Thanks for reading the blog!