Wishing everyone a very shiny nose at Christmas... 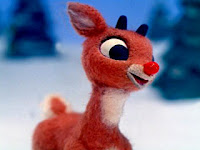 The other day I found myself teaching traditional Christmas carols to three-year-old twin grandsons. They are at the late-toddler stage in life when they begin to understand the true meaning of Christmas, which is to say the birth of Rudolph the Red-Nosed Reindeer.

Rudolph, with his nose so bright, looms large among this set – no surprise there. But I hasten to sternly remind them -- and you -- that there’s more to Christmas than “Rudolph the Red-Nosed Reindeer.” There’s “Frosty the Snowman,” after all, whose impact on Christendom almost, but not quite, parallels Rudolph’s.

With “Rudolph the Red-Nosed Reindeer” looming so large in children’s minds at Christmastime it hit me in the impromptu carol-singing session with these youngsters that this disfigured reindeer (remember: all of the other reindeer laughed and called him names) could serve as a teaching vehicle for other songs of the season. Kids really understand Rudolph, and, the thinking went (mine), he could help expand their minds in learning other carols.

It started when we veered from “Rudolph,” the lyrics of which were already well known even to the children, and embarked on “Frosty the Snowman.” Unfortunately, none of us could remember the second line of “Frosty,” so we substituted “had a very shiny nose.” Worked beautifully.

Of course (it goes without saying) in children’s eyes nothing matches “Jolly Old St. Nicholas” himself, whose arrival up on the rooftop, click, click, click, and descent down through the chimney on Dec. 24 or thereabouts is the highlight of the holiday season, eclipsing even Black Friday. “Jolly Old St. Nicholas” had a very shiny nose works pretty well, you’ll find if you try to insert it. After all, he’s been flying around outdoors in winter like the down of a thistle. Of course his nose is shiny and as red as a cherry.

In fact I came to realize that, “had a very shiny nose,” can be adapted to almost any carol, sometimes with a crowbar, but what the heck, it’s Christmas.

Few people know, for example, that “Good King Wencislas” had a very shiny nose. Well, if he didn’t he does now around our place.

“We Three Kings” -- the ones of orient are – now have very shiny noses, it turns out. And why not? They’ve traveled a long way in a very cold season lugging spices and gold.

I hesitate to bring God up in such a secular season, but those “merry gentlemen” He was resting (something I could use) and who had “nothing to dismay” each now has a very shiny nose in our version.

You get the idea. I admit it’s difficult to adapt “Deck the Halls” to include a very shiny nose, but surely as “don we now our gay apparel” we can have very shiny noses all around. Fa-la-la-la-la, la-la-la-la.