Small light in the bleak December...

He’s tall – six-five, maybe even six-six – lanky and taciturn. He wears dark clothes -- often hooded outer garments to protect him from the elements as he plies his trade outdoors in the colder months. He looks to be anywhere from his mid-50s to early 60s.

His trade? Rounding up grocery shopping carts at a large supermarket where I shop. When I encounter him in the parking lot, he usually looks away or over my head as he forms trains of shopping carts and maneuvers them into the store’s vestibule.

Because I’ve seen him so often, some time back I started greeting him with a smile and quick hello whenever I see him at the store. A few times there’s been a slight acknowledgement of my greeting, possibly even a faint smile crossing his face, although he quickly looks away. He never makes a sound, though.

He was working at the store on Christmas Eve when I dashed in to pick up last-minute holiday provisions. He was just inside the door, protected for the moment from a strong snowstorm, his fleece hood intact over his head.

I greeted him, as usual, and, as usual, got no response. Just a moment of eye contact as I swept by and entered the surprisingly busy – for late afternoon on Christmas Eve – supermarket.

I gathered the few items I needed and checked them out, carrying them instead of using a shopping cart. He was still inside near the entryway as I hurriedly walked past, this time not looking at him because I had greeted him on the way in a few minutes earlier.

As I strode past, bracing for the cold and snow a few feet away, I heard a faint voice from over my right shoulder where he was standing.

“Merry Christmas,” he said in an almost inaudible low tone, the first words he’d ever spoken to me in several years of contact there at the store, usually in the parking lot.

“Yeah, thanks, same to you,” I shot back as I headed for my car, stunned that he had finally spoken.

“Merry Christmas.” We hear that wish countless times during the holiday season, and give as good as we get without much thought, but that Christmas greeting I’ll remember for a long, long time. 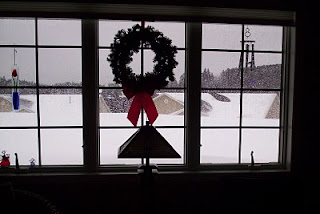 Through our snowy window on Christmas Day. Merry Christmas everyone!