Duluth: Out in the middle of somewhere... 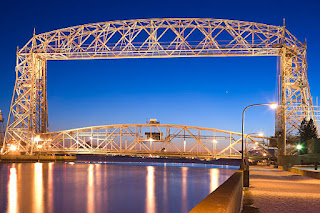 Written for the Duluth News Tribune by Jim Heffernan/July 9, 2022

So, the people in charge of promoting Duluth have come up with a new slogan: “Love it Like We Do” (even when it’s foggy, rainy and chilly on the Fourth of July?). Those of us who live here must love it or we wouldn’t have stayed, right? I have lived in Duluth for a long, long time.

Long enough to remember when we had other catchy slogans like “One Great Lake and a Whole Lot More” and even “Hay Fever Capital of…” of something. I forget. The Midwest? Maybe America. The world?

Duluth got a lot of mileage way back in its colorful history by declaring itself the Hay Fever Capital. Those were the days before widespread air conditioning, when people from the dust bowl and pollen-rife breadbasket of the nation sneezed a lot in the summer, eyes watering.

Duluth welcomed them with open arms and frequent cool breezes off Lake Superior, just as we welcome their successors today by sharing with them our love of, to recall another old slogan: “The Zenith City of the Unsalted Seas.”

Several years ago the old Duluth Convention and Tourist Trap Bureau people were retiring whatever slogan was then extant and asked the public for ideas for a new slogan. I had an idea and let them know what it was. Now I share it in print for the first time: “Duluth: Out In the Middle of Somewhere.”

Onward. I read in this newspaper that another group has been organized to promote community learning and civic engagement here. They plan to meet monthly at a forum called The Lyceum. Sounds like fun but is that a good name? Lyceum?

Of course it’s drawn from the ancient Greek venue where the philosopher Aristotle said all kinds of wise things. But to Duluthians of a certain maturity it brings back thoughts of an old theater downtown on the site where the big Maurices building now stands. After an auspicious past, the Lyceum eventually became known as “The Rats’ Palladium.”

When it was completed in 1893 (I don’t actually remember the grand opening — I’m not THAT old) it was considered one of the finest theaters north of Chicago. Huge stage, hosting some of the top touring theater companies of the day featuring well-known stars.

The Lyceum Theater had an orchestra (that’s what they call the main street-level auditorium) and three — yes, three — balconies. Total capacity was upwards of 1,500 souls.

By the time I came along 50-some odd (I’ll say) years later it had gone down hill quite a bit. Its imposing entrance on Superior Street was covered over and a tacky marquee placed on the front of the building advertising movies — two at a time for 50 cents.

As a kid I loved going to the Lyceum on Saturdays, gobbling 10-cent popcorn and sitting through four hours of second-run movies.

But by then the grand old theater’s reputation had slipped to the point where it was sniggered around my junior high school that the top balcony — the third balcony — was actually (cover your eyes if you are sensitive) a balcony of ill repute. This unfounded rumor was believed because there was a blinking red light atop the marquee outside. Blinking red lights used to connote…well, you know.

Years later, after I’d reluctantly grown up and become a fledgling journalist, the Lyceum showed its final double feature in 1966, was shut down, and razed when urban renewal wiped out Duluth’s bowery, including a tavern down the street with the oxymoronic name “Classy Lumberjack.”

But before it was demolished, an open house was held for people to wander at will through the theater. It allowed me to stand on a stage where many stars of the long past had performed, their names still well known then but not now. Does anyone still know who Sarah Bernhardt was?

Before I exited that day, recalling those old rumors of nefarious goings on on the third balcony, I wandered up there to see what it was like. It was filled with old rolled up carpets and other discarded stuff from the building.  No evidence whatsoever of a sordid past.

Good thing. If all those rumors had been true, it certainly could have negated the slogan “Love it Like We Do.”