Remember the recent eclipse of the moon? 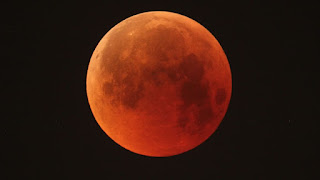 Many readers might still recall the big moon eclipse of two weeks ago. Things are happening so fast lately — conquest, war, pestilence, monkeypox, Johnny Depp — it’s hard to keep up with stuff.

I dutifully watched the first half of the eclipse — the part where we lost the moon. I let nature or whatever take its course from there on in, confident as I hit the sack that the moon would be back in due time as I slept.

Watching eclipses can be a bit tedious, despite the wonder of it all, with the earth blocking the light of the sun on its surface, turning the silvery moon into a muddy dark orb. It takes quite a while for the earth’s shadow to make its way across the whole moon, as you might have noticed if you were watching.

I was bound and determined to watch it though, out on our patio in a comfortable lawn chair on a beautiful clear night, with a good cigar to draw on. There are certain times for a cigar, and a total eclipse of the moon is one. If you only smoke during eclipses it’s probably OK health wise.

Still and all, though, as significant an extraterrestrial event as an eclipse might be, let’s face it: They can be a little on the boring side. It’s kind of exciting when the shadow first comes up on what they call the moon’s penumbra, but then the show lags a bit.

So as I watched, I found myself ruminating about many other things — “shoes and ships and sealing wax and cabbages and kings, and why the sea is boiling hot, and whether pigs have wings,” as the walrus puts it in Alice in Wonderland. Mainly, I thought about how the moon shows up in so many old songs, as the melodies coursed their way through my consciousness as earworms.

“By the light, of the silvery moon, I like to spoon, with my honey in June,” is an ancient number not in step with the hip hop generation. I don’t think they call couples’ billing and cooing “spooning” any more, not that billing and cooing is exactly common parlance today either. But you know what I mean.

Hey, get a load of that, I thought as the earth’s shadow took another bite out of the bright, full moon. Another melody came to mind that I hadn’t thought of in a long time:  “Fly me to the moon, and let me sing among the stars, let me see what spring is like on Jupiter or Mars…”

I’ve been thinking a lot about what this spring is like right here in Northern Minnesota. Maybe it’s better on Jupiter or Mars. Wouldn’t take much.

Oops, here’s another ditty that invaded my consciousness: “I see the moon, the moon sees me, down through the leaves of the old oak tree, please let the light that shines on me, shine on the one I love.” Does ANYBODY remember that? It was popular when I was a kid.

So much moon in music, so increasingly little of the moon’s still visible surface as I watched the shadow envelop fully half of the fading sphere, the rest still bright.

“Hey diddle diddle, the cat and the fiddle, the cow jumped over the moon, the little dog laughed to see such a sight, and the dish ran away with the spoon.” Where’d that come from? It’s not even a song, but a Mother Goose nursery rhyme. But that Old Devil Moon kept coming up in so many ways as the earth’s shadow continued its journey across the moon, not a cow in sight.

There’s more. “Full moon, and empty arms,” the first line of lyrics of a pop song set to the main theme of Rachmaninov’s Second Piano Concerto. That’s the music in the movie “The Seven Year Itch” when actor Tom Ewell is making whoopee with Marilyn Monroe as he romances her with the immortal line, “I’m going to take you into my arms, and I’m going to kiss you, very quickly and very, very hard.” Right then she falls off the piano bench.

Jeez, that’s a goofy thing to be thinking about as I watched the moon darken, becoming fainter and fainter. Besides, my cigar having long played out, I was getting a little hungry.

“When the moon hits your eye like a big-a pizza pie, that’s amore.” Thank you Dean Martin. Yeah, what’s not to love about pizza?

But for me, the night was no longer young, and the moon was no longer yellow; just a dark ball barely visible with the naked eye — clearly not a good time to “dance with the girl with the hole in her stocking, dance by the light of the moon.” (Caution: Do not attempt during a lunar eclipse.)