Naughty- naughty on the Danube... 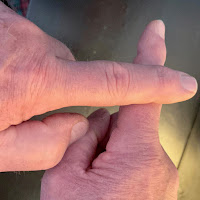 Written by Jim Heffernan for the Duluth News Tribune on Saturday, April 17, 2021

When my kids were kids and misbehaved in some small way, I would sometimes employ the age-old hand signal for “naughty-naughty” (shame on you hand gesture).

You probably know it: You make fists with both hands with the index fingers extended, as in pointing, and then repeatedly rub one index finger along the other. Somehow, through the ages, this hand signal has survived as the sign for minor misbehavior that I, and probably others, call naughty-naughty.

It’s handy, and most everyone comes to understand it as the light-hearted signal for minor family infractions. If a child commits major infractions, like burning down the house, this is not the signal to use. But if the child spills his or her milk by being obstreperous at the breakfast table, well, one extended index finger sawing the other works just fine, along with a dishrag to clean up the mess.

The nice thing about it is that, for fun, it can extend into teen years and even young adulthood, just as a joke. Nothing need be said, the gesticulation says it all.

There have been many naughty-naughties in my own life, like the time in 10th grade world history class when the teacher asked me to name Alexander the Great’s horse and I answered, “Silver,” causing uproarious laughter in the classroom. We were wild teens back then. It was a regular blackboard jungle.

I believe my grandchildren are now aware of the naughty-naughty hand signal too, even if they don’t flash it yet. It’s sort of a family tradition, I suppose. Maybe it’s one of yours too.

But I hadn’t displayed the naughty-naughty much in recent years. Kids grown and on with their own lives, flashing the sign to their own children and so on down through the generations.

Still, I believe it’s an American tradition worthy of propagation and mention, even if only in a midwestern newspaper.

You wonder though (at least I do), is it only an American tradition? Maybe it’s understood beyond the land of the free and the home of the braver than me. Here’s some evidence.

A couple of years ago we signed up for a European river cruise that took us up the Danube from Budapest to Vienna and on through various quaint towns in Germany and ending in Amsterdam, Holland. For the record, they switch rivers at the north end of the voyage, even plying the fabled Rhine.

I have cruised on big boats and river cruise boats, and like the latter the best. A couple hundred people vs. a couple thousand-plus. You get to know some fellow travelers pretty well on the river boats and become acquainted with some members of the crew too — friendly young people who serve the mostly American guests with a smile while spouting various degrees of knowledge of the English language.

You’d never need to flash the naughty-naughty to them, even if they might know what it means. If I thought about it I’d assume they wouldn’t. American tradition, possibly just Midwestern. Maybe just me. Who knows?

Segue to the shipboard cocktail hour one pleasant afternoon on the Blue Danube, which actually looks kind of brown up close. I was standing at the bar in the vessel’s cocktail lounge waiting for friends to show up so we could take a table and have a libation before dining.

The bartender was a cheerful young woman, maybe in her mid-20s, of unknown national origin to me, who was handling the horseshoe-shaped bar alone. I was alone at the bar too. She spoke English quite well but, of course, in what used to be called broken. I couldn’t tell exactly what that accent represented but, being in Germany, I naturally assumed she was German.

As I chatted with her briefly, she was filling drink orders for waiters serving other travelers seated at tables throughout the spacious cocktail lounge. Suddenly, in engaging with one of the tray-bearing waiters, she became very agitated over a drink mistake or something. She angrily rebuked the waiter in a language I didn’t understand but assumed was German. The waiter, thoroughly chagrined, turned on his heel and resumed serving travelers.

She then turned to me again, smiling. Kerfuffle over. But to kid her a little I clenched my fists, index fingers extended, and rubbed one index with the other. I didn’t know if she’d understand what it meant, but took a chance. She grinned and seemed to recognize it right away.

“Do you know what that means in German?” I ventured.

Her response was quick. “I know what it means in Polish.”

Oh, my…travel can be so broadening.