Spirit Valley Days in Duluth: Remembering when cars were king...

Western Duluth did not escape ’50s car club phenomenon...  by Jim Heffernan
Note: I wrote this column a few years ago for the now-defunct on-line Zenith City magazine (although the site continues as a blog of Duluth area history). I'm reprinting it here today to call attention to Spirit Valley Days, ongoing this weekend in what folks of a certain age call West Duluth. Since one of the major events is a vintage car show, it seemed like a good time to recall with this column a day when vintage cars were king in West Duluth...at least for young men (or aging adolescents). JH

I’ve noticed it too. Young people today are not as focused on cars as those in earlier generations. Now they’re more interested in technology, the Times columnist pointed out, citing statistics showing that many young people today—millennials—often don’t even bother to get driver’s licenses when ample public transportation is available.

I came of age in the 1950s, a part of the post-World War II generation that, unlike its elders who had endured the Great Depression (when even many adults couldn’t afford cars), embraced the automobile as something more than just transportation. The cars had to be “souped up” and “customized” into what were euphemistically called “hot rods” or “street rods,” some of which were not so hot at all, but more of the jalopy class.

It was nearly every teenage boy’s dream to have such a car, mainly to impress girls, impress their peers, trounce other hot rodders in street drag races and rebel against their parents, in roughly that order. Also, cars were handy in the romance department. The era was faithfully depicted in the movie “American Graffiti,” although that story was set in 1962.

Throughout Duluth in that era car crazy boys banded together and formed what were called “car clubs.” In Duluth’s western precincts, largely within the limits of the Denfeld High School district with some Morgan Park spillover, the only car club was called the “Regents.”

I was a charter member, and even named the club. A group of us got together in a West Duluth living room in 1955 to organize and, trying to come up with a name, someone suggested “Road Gents.” That seemed kind of corny to me, so I suggested we compress it and call ourselves the Regents. It had no connection to cars or much else outside of the University of Minnesota governing body, but it sounded classy. We adopted it, and a car club for the city’s western neighborhoods was born, complete with fancy license plate-size plaques bearing our name to be displayed on the rear bumpers of our cars.

The original group numbered about 15, but when we began flexing our muscles, the club grew, perhaps doubling in size. The Duluth car clubs—central and eastern neighborhoods had the “Road Toppers” and “De Malos Marauders” among others—were officially organized to assist any motorists who might be in distress: flat tire, out of gas, conked out engine, lost. We had wallet-size business-style cards printed up to hand to people we helped, stating, “You have been assisted by a member of the Regents Car Club of Duluth, Minnesota.” 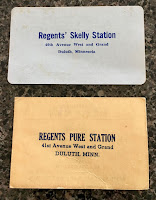 I had a passel of them in the glove compartment of my hot little ’40 Ford DeLuxe coupe powered by a ’48 Merc engine with twin exhaust pipes and rumbling mufflers to die for. I never gave out one card. Never helped anybody. Almost nobody did. I still have a few of those calling cards in a box somewhere, never to be used.

Duluth’s several car clubs were even associated with one another as the “Joint Association of Car Clubs,” JACCs for short. They met monthly in City Hall, mainly to promote the idea of the city building an official drag strip. It never happened.

Mainly, the members of the Regents just wanted to get together, fix up cars, and drag race each other after dark on wide Oneota Street, when the cops weren’t around, or on divided Highway 61 atop Thomson Hill sans the highway patrol.

West Duluth’s Regents went beyond any other city car club by establishing our own service station in a rented building still standing on the southeast corner of 41st Avenue West and Grand. It was called “Regents Pure” because we pumped gas supplied by the Pure Oil Co. Our building had a three-stall garage and an office. We sold gas to the public, and the garage was handy for club members to work on cars, installing dual exhausts or changing oil or tires and in some cases changing entire engines.

I suppose the car club was an early form of “gang,” although there was no criminal element aside from street drag racing. By today’s gang standards, we were as harmless as aging Boy Scouts trying to work our way through adolescence. Most of the members went on to college after our Denfeld years, when interest in the car club inevitably faded.

When definitive histories of Duluth are written, it’s doubtful any will include this brief car club phenomenon. Most of those who participated are now in their 60s and 70s with only dim memories of a time—a decidedly more innocent time—when America’s car culture really got rolling, often two cars side-by-side, engines roaring, tires squealing, mufflers blaring, with the noble goal of finding out which car could cover a quarter mile the fastest.

Well, maybe not so noble, but it was fun.
Reprinted from Zenith City Online, July 11, 2013