Political memoirs of a ‘distinguished’ ex-journalist... 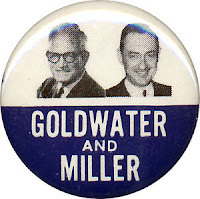 Now we again find ourselves in the midst of a hotly contested political campaign in Duluth, the Eighth Congressional District, the State of Minnesota (also Wisconsin, if you’re inclined that way). Everything but the “president.” (Quotation marks intended.)

My journalism career covering political campaigns started way, way back in 1964, briefly covering the campaign of Congressman William E. Miller for vice president of the United States of America. (What other United States would I be referring to? More on that later.)

Some readers — oh, I’d say just over 99.9 percent — do not remember William Miller, but I do. He was the running mate of Barry Goldwater in Goldwater’s bid for the presidency in 1964. Some readers — oh I’d say about 42.3 percent — do not remember Barry Goldwater either, but I do. The Republican Goldwater-Miller team was facing the Lyndon B. Johnson-Hubert H. Humphrey team fielded by the Democrats. All ancient history…like me.

Miller visited Duluth late in the campaign, drumming up votes for Republicans in perhaps the most concentrated Democratic region of the country. Some might recall Johnson-Humphrey won. I was assigned to follow Miller, mainly around UMD, where he held an impromptu press conference on the lawn outside Kirby Student Center, where as a recent student I had spent a lot of time smoking cigarettes and not hitting the books.

There have been many, many campaigns between then and now during which I had contact with incumbents and hopefuls in my journalism role. After a while you begin to notice certain similarities among people who run for public office, especially the big-timers seeking the higher offices.

All of which brings up the current campaign, which I am viewing from the sidelines, having retired

from active journalism some time ago. Certain themes never change, and today I thought I’d share a few that I’ve noticed over the past half century, give or take a decade or two.

This is a nonpartisan report. Candidates for the Democrats, Republicans, Libertarians, Independents, Reformists, Martians, any other, all often say the same things, lacing their pronouncements with the same declarations. Here are some I’ve noticed:
·      Let’s begin by picking up on “United States of America.” They hardly ever just say “United States” when they refer to our beloved country. Is there anyone within hearing distance who needs to be told they are talking about the United States of America? Yet they seem incapable of just saying United States without the “of America.” Maybe there are other “United States” somewhere on the planet but I can’t think of any.
·      All candidates roll up their sleeves a lot. Standing before rapt (or unwrapped) audiences day after day, they call for “bold reforms” of just about anything and vow that when elected they are going to roll up their sleeves and tackle the problem or maybe all problems. Some make these pronouncements jacket-less and wearing short sleeves. Ah, metaphor.
·      All Americans are “hard working,” when referred to by candidates. Are they? I am not a hard working American. I’m retired. Others still in the workforce might slough off a lot. There are some acknowledged exceptions cited by candidates of a certain stripe: Americans collecting welfare are not hard working, nor do they roll up their sleeves.
·      Military personnel are all “heroes” in the words of many politicians. This includes active or reserve personnel plus anyone who has ever served in the military, known as veterans. All are heroes on the campaign trail. Well, I served in the military and never achieved hero status. In fact, while serving in the military I never met anyone I consider to be an actual hero. There are some, of course. But very few.
·      When things get tough (and the tough get going), politicians never fail to “pick themselves up, dust themselves off” and tackle the problem. What problem? Any problem. Our society has a lot more problems during the political campaign season.
·      Woe betide the candidate who doesn’t pick him or herself up, dust off and pin a teensy-weensy American flag on their lapels, provided they are wearing jackets. Sometimes they must doff their jackets to roll up their sleeves to come to the aid of hard-working Americans or heroes who serve or have served in the military.

To conclude: In my own years as a distinguished journalist (distinguished from, say, accountant or bartender) I must say I always sought to comfort the afflicted and afflict the comfortable. After all, the pen is mightier than the sword. Hmmm, that has a ring to it.
Posted by Jim Heffernan at 4:38 PM