Someday adding Trump to Rushmore could help boost American agriculture...
The other day I found myself doing some deep thinking – very deep thinking – about what the future might hold if Donald J. Trump is elected president of the United States.

I’m not talking about what would happen to the country if Trump should become president. We should save those ruminations for registered, bona-fide pundits, so many of whom appear nightly on cable television to predict the future according to their political persuasion.

No, I’m speculating on what might transpire should a Trump presidency be deemed successful, even great, by the noisy majority that would have elected him (without any help from me) and it is decided that the Trump visage should be added to those of the four presidents already sculpted on Mount Rushmore.

The idea of putting a fifth revered president on Mount Rushmore comes up every so often when over-zealous supporters of one ex-president or another deem it appropriate to propose adding the face of their man (it’s always been men, unfortunately) to those of George Washington, Thomas Jefferson, Abraham Lincoln and Theodore Roosevelt, pince-nez and all. So far we’ve avoided that embarrassment.

Such were the deep thoughts running through my head as I contemplated these matters and, in a Eureka Vacuum Cleaner moment, I came to realize that, should it ever happen, the addition of Trump to Rushmore might be a good idea, as abhorrent as it seems today.

If they sculpted his face on the mountain, to accurately portray him they could plant wheat grass on the top of his head to represent his hairdo. Wheat grass grows quite tall and is close to the hue (you wouldn’t say “color”) of Trump’s carefully sculpted mane. 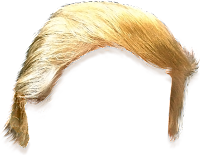 What a terrific symbol of America. Amber waves of grain beneath the beautiful spacious skies atop the purple majesty of a South Dakota mountain right on America’s third-most revered work of sculpture.

So, to bring all this together, Trump on Rushmore isn’t such a dreaded idea after all, should it come about. With wheat grass crowning his brow, it would be a tribute to American agriculture, and the face below it an enduring symbol of American folly.
Posted by Jim Heffernan at 1:03 AM