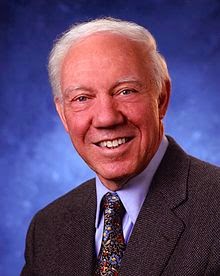 Oberstar did many big things,
and also some small ones
By Jim Heffernan

I knew Jim Oberstar quite well – in the way journalists often know politicians.

The genial former congressman, who died Friday at age 79, was a frequent visitor to the Duluth News Tribune, meeting with the editorial board several times a year. I was part of that board.

Oberstar represented Minnesota’s Eighth District for 36 years before being ousted from office in 2010. This weekend he is being lionized in the media for his great service to his district, the state of Minnesota and his country. Even President Obama issued a statement praising Oberstar’s service. The president is one of many who have spoken about Oberstar’s brilliance, his efforts to enhance all forms of transportation in the United States and his steadfast attention to issues in the Northland, especially regarding the economy.

Oberstar deserves all of that praise.

But here’s a different insight into Oberstar the man. When he’d visit the newspaper we’d sometimes go to lunch at a nearby restaurant to do our talking, rather than stay in the office. One such time we went to the revolving restaurant atop the Radisson hotel, just across the street from the newspaper.

As we were ushered from the elevator to our table – there were perhaps five of us including the congressman – I noticed a woman server standing with her back to a wall as we swept passed by her. She signaled Oberstar and he immediately stopped to talk to her as the rest of us went on to be seated, perhaps 30 feet away.

I could see emotion on her face as she addressed Oberstar, who was listening intently to her. When they were finished talking – were those tears in the server’s eyes? – he gave her a warm hug, and then moved on to join the rest of us.

What that was about was never totally clear. I believe he said he’d helped her or her family with a foreign adoption, and let it go with that. On with our discussion of the really important matters of the day.

But you got the sense that the concerns of one restaurant server who needed his help were as important to Oberstar as those of the lobbyists, special interests, his party associates and big-wigs he dealt with all the time as the sometimes chairman of the powerful House Transportation and Infrastructure Committee.

And as the revolving restaurant slowly spun around a couple more times, we undoubtedly discussed the mighty issues of the day. Who can recall? But I’ll always remember the thankful server, standing there in her work uniform, who got as much attention from Oberstar as a captain of industry might…or a newspaper editorial board.

For more about the recent death of Congressman Jim Oberstar, read the story in today's Duluth News Tribune HERE.
Posted by Jim Heffernan at 2:53 PM