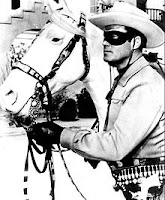 Return with us now to those thrilling days of yesteryear when, from out of the past, come the thundering hoof beats of the great horse Silver. The Lone Ranger rides again.

I didn’t put quotation marks around those words to fool readers into thinking I might have written such a powerful opening paragraph, which rivals such other strong opening paragraphs as, “In the beginning God”, “Elmer Gantry was drunk”, “It was a dark and stormy night in the best of times and the worst of times…” and so on and so forth.

Of course we are talking here about a part of the opening narration for the radio version of “The Lone Ranger,” which had a profound influence on my life in my eternal quest for “truth, justice and the American way,” or was that “Jack Armstrong the All-American Boy”? It gets kind of fuzzy as time passes.

“Faster than a speeding bullet…” Oh, excuse me; I’m getting carried away.

Why all this talk of the Lone Ranger now? Well, for a very good reason. The Walt Disney Studio in – brace yourself – Hollywood, California (where all the Democrats are), is making a movie of the Lone Ranger story starring none other than Johnny Depp.

Johnny Depp as the Lone Ranger? No, no, no. The quirky actor (see “Pirates of the Caribbean on Stranger Tides” than its two predecessors in a movie franchise that has struck an iceberg) will be playing Tonto, the Lone Ranger’s faithful Native American companion. Armie Hammer plays the Lone Ranger in this updating of the old story, to be released next year. Armie Hammer is not yet a household name outside of people who bake a lot.

I had thought Tonto had fallen victim to political correctness but here he is again, and portrayed by Johnny Depp, a Caucasian actor if there ever was one. At least Tonto on radio and TV was played by an Indian actor named Jay Silverheels (real name Harold J. Smith), who is dead and has lost popularity himself among Native Americans. We often lose popularity after we die, with the exceptions of Abraham Lincoln, James Dean, Marilyn Monroe and Jeremy Bentham. (You won’t find those four names in the same sentence very often.)

But enough Tonto talk. He’s on his way back, and that’s that. Take it or leave it.

I actually wanted to say a word about the Lone Ranger’s mask. Even more famous than the Phantom of the Opera’s mask, or The Scarlet Pimpernell’s for that matter, does anyone really believe that putting on a Lone Ranger mask, covering just the eyes and bridge of the nose, would disguise a person’s identity? Come on!

The scanty mask was not a problem on radio, but on TV the minute you saw the Lone Ranger you knew it was Clayton Moore, the actor who played him on the tube. That powder blue official Lone Ranger uniform helped.

Did they really expect us to believe that the outlaws who killed his Texas Ranger brother wouldn’t recognize him in THAT mask? I don’t think so. You’d think they’d have learned from raccoons. They have a similar band across their eyes and nobody mistakes them for, say, cats, except that woman in the TV commercial you probably didn’t see.

Not to take anything away from the Lone Ranger, who had a profound influence on my life. I listened to him on radio every day in my childhood. The program was often on the kitchen radio when we ate supper (now known as “dinner”) in my childhood home, stifling family conversations about the meaning of life and stuff like that.

The half-hour program always ended when the Lone Ranger has fought for law and order in some Old West town and rides off on his fiery horse at the speed of light crying “Hi-yo Silver, away” as some character like the local sheriff asks, “Who WAS that masked man?”

As if they didn’t know with that teensy weensy mask. Get real, sheriff.
Posted by Jim Heffernan at 9:21 PM