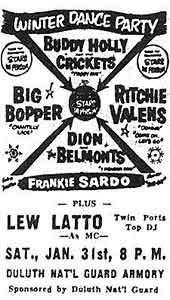 “…when I was about 16 or 17 years old, I went to see Buddy Holly play at Duluth National Guard Armory, and I was three seats away from him, and he looked at me and, …I know he was with us all the time we were making this record in some kind of way.”
Bob Dylan,  accepting the 1998 Grammy for “Album of the Year”
I, Bob Dylan and other area youths packed the Duluth Armory on January 31, 1959 to take in the performances of Buddy Holly, Ritchie Valens and J.P. “Big Bopper” Richardson, three of Rock and Roll’s most promising musicians of that era. “The Winter Dance Party Tour” began on January 23, 1959 with performances scheduled for 24 cities. The Duluth appearance took place three days before the tour tragically ended. Duluth radio talk show host and broadcast executive, Lew Latto, was then a popular young DJ who promoted the event and served as the MC.
On a cold winter’s night, the small private plane carrying the performers crashed, claiming their lives. The plane was heading to Fargo, North Dakota following what ended up to be the tour’s final performance in Clear Lake, Iowa. As Don McLean wrote in his classic music parable, American Pie, the plane crash resulted in "the day the music died."
While I had a different experience than Bob Dylan, neither of us forgot that moment in Duluth history. The 5oth anniversary of “Winter Dance Party Tour” is taking place this week–with the anniversary of the Duluth performance coming up next week, January 31st and the anniversary of the now famous plane crash this February 3rd.

To commemorate this moment in Rock and Roll history, I'm including one of my Duluth News Tribune columns about the Duluth event as I remembered it, “ Three Days Before the Rock Stars Died.” The DNT column is included in my book, Cooler Near the Lake, in a section titled, “The Rich and Famous Collide With Duluth.” That section of the book also includes writings about Calvin Griffith, Hubert Humphrey, Jessica Lange, John F. Kennedy, Elvis Presley, Gregory Peck, Johnny Cash and Paul Wellstone. The column follows in the post below...

Posted by Jim Heffernan at 2:00 AM