Poem from the book 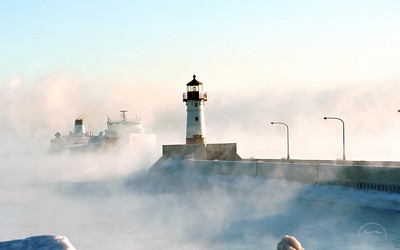 "Bring your sweater when you head down the hill 'cause it's cooler near the lake!"


My book title, "Cooler Near the Lake" was inspired by a poem I wrote of the same name while writing a weekly column for the Duluth News Tribune.

While the poem is included in my book–along with many other of my musings as a newspaper columnist–I've also copied it here for you to read.


COOLER NEAR THE LAKE
by Jim Heffernan

They say we’re in God’s country,

And few could argue that,
With forests tall and waters blue
And folks who’ll go to bat.
But one thing gets my dander up,
Beyond just give and take,
And that’s the report on the radio
That it’s cooler near the lake.

It happens every springtime,
And in the summer too,
Just when buds are popping
And the skies are getting blue,
When the world embraces sunshine
And our bones for warmth all ache,
It’s then you know the reports will show
That it’s cooler near the lake.

It’s only here, and nowhere else,
That such a case is true;
In nearby towns and villages,
There’s no need there to rue;
They get the balmy breezes,
They’re out with hoe and rake,
But in Duluth, you know it’s the truth,
It’ll be cooler near the lake.

Just take a ride to Hermantown,
Or Hibbing or Virginia;
Go down to Minneapolis
If you think you’ve got it in ya.
You’ll find that they are basking
In the heat, make no mistake,
But in Duluth, you know, forsooth,
It’ll be cooler near the lake.

I sometimes think the weather here
Will never get past fifty;
If it happens to rise to sixty-five
Everyone thinks it’s nifty;
By afternoon you can bet your boots,
If you don’t you’ll be a fake,
By eventide the temp will slide,
And it’ll be cooler near the lake.

We love our lake, don’t get me wrong,
Its gorgeous shining water,
But looks are only surface deep,
There are other things that matter;
Like warming bones that winter froze,
And limbs that quiver and quake,
Fat chance we’ve got to heat ‘em up
When it’s cooler near the lake.

It’s not as though we don’t get warned
By all those darn forecasters;
I swear each night, as they give our plight,
That they’re no-good dirty --------.
They say the same thing every time
When they describe our fate:
We’re sorry folks, and it’s no joke,
It’ll be cooler near the lake.

I know the day is coming when
The real God’s Country beckons,
And when St. Peter meets me there,
He’ll ask my home, I reckon.
And when I tell him it’s Duluth
He’ll say, “For heaven’s sake,
“Ain’t that the place everyone says
“Is cooler near the lake?”

“That’s it,” I’ll cry, “oh kindly saint,
And in this realm please spare,
From chilly off-lake breezes,
And winter underwear.”
“If it’s heat you want,” he’ll reply,
In the other place you’ll bake.”
“Fine, send me any place except
Where it’s cooler near the lake!”

Originally appeared in the Duluth News Tribune on Sunday, June 3, 1979